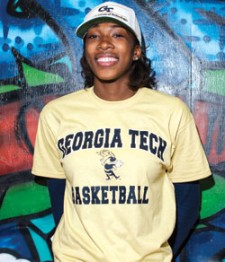 The people of Roxbury believe “It takes a village to raise a child.”

So much so that echoes of the phrase rang out as nearly 100 friends, former teachers, coaches, family and community members gathered to show their love and support for two teens’ college commitment signings.

Attending college is often confirmation of a dream turned reality, especially for those forced to grow up with the plight of inner-city living. But after overcoming obstacles, childhood friends and brilliant basketball players Wayne Selden Jr., 18, and Donnaizha Fountain, 17, have received full, four-year athletic scholarships to college.

They were sought after by some of the nation’s top schools. And after much pain-staking deliberation, Wayne, a small forward at the Tilton School, will kick it into overdrive at the University of Kansas. Donnaizha, a guard at Cambridge Rindge and Latin School, will grind hard for Georgia Tech beginning in the fall of 2013.

Tears welled up in Donnaizha’s eyes as she explained her greatest challenges: “Growing up without a father and not by choice, because he was murdered, and then also growing up with a young parent that was also growing as I was,  I felt I came into this world without a chance,” she said.

Ra-Ra, as she’s known to those closest to her, lost her father, Rasheed Fountain, in a widely publicized 1995 murder.

“I’ll never forget when the newspapers rang off after her father had got killed. My baby shower was the next day,” said her mother, Donniece Watson. “[I always wondered] if whoever wrote that stopped to think, ‘What’s gonna happen to the 15-year-old and the baby?’”

Seventeen years later, Donnaizha is an award-winning basketball player and Donniece is working on her Master’s degree.

Fun-spirited and warm-hearted,  Donnaizha was motivated to turn trials into triumph by a hunger to sharpen her skills and be more than what her surroundings say young black females can be. A matchless family support system also played a part. Wayne Selden Jr. can relate.

And while his struggles differed, there were bumps along his path to success as well.

“Wayne’s had people he thought were friends but weren’t, friends that started out with him that didn’t follow the rules, and some he’s lost to violence,” said his mother, Lavette Pitts.

When the going starts to get tough, the cool, calm and collected Wayne reminisces on his family, goals, dreams and little brother, his biggest critic.

“Trying to please him means a lot to me,” he said.

Since their early years of shooting hoops, a deep-seated passion for the game has pumped through Donnaizha’s and Wayne’s veins. So as they put pen to paper and confirmed their attendance to their colleges of choice, sighs of relief and shrieks of joy let loose within the crowds. It was all proof that the pair’s success is not theirs alone — it symbolizes what “It takes a village to raise a child” truly means.

Donnaizha’s signing took place at the Frisoli Youth Center in Cambridge on Nov. 19, and Wayne’s was held at the John A. Shelburne Community Center in Roxbury, where his basketball career began, on Nov. 16.