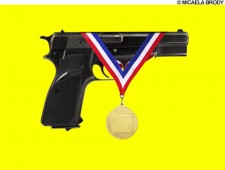 image from the Boston Phoenix

The BPD adds insult to injury
Scream On
By CHRIS FARAONE | February 5, 2013

Like virtually all big-city police departments, the BPD has an image problem that never seems to go away. And this year is already looking pretty ugly.
Take Officer Henderson Parker, the 18-year veteran who was charged with rape in January; he’d previously served a 30-day suspension back in 2002 after a domestic spat “that resulted in injuries,” according to police records obtained by the Boston Globe.

Parker was also on the scene in 2008 when the arrest of Emmanuel College student David Woodman spiraled out of control. On the night the Celtics won the NBA championship, Woodman had been partying on the street near Fenway Park, when he and some friends, some of whom were drinking in public, clashed with police. After being tackled by officers, Woodman — who had a heart condition — stopped breathing for several minutes, suffering brain damage from the oxygen deprivation. He died in the hospital 11 days later.