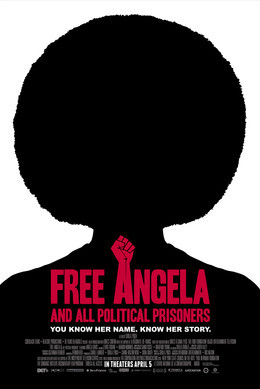 Free Angela And All Political Prisoners
Presented by RedLetterInk Media

A pre-event on June 18th in of the observance of June 19th as the African American Emancipation Day the oldest known celebration commemorating the ending of slavery in the United States RedLetterInk Media will be showing A documentary that chronicles the life of young college professor Angela Davis, and how her social activism implicates her in a botched kidnapping attempt that ends with a shootout, four dead, and her name on the FBI’s 10 most wanted list will be showing in Boston, MA. So if you haven’t seen it the last time it was Boston here’s your second chance.

Movie presentation of Free Angela and all Political Prisoners

Free Angela is a gripping historic account of the events that catapulted a young University of California philosophy professor into a controversial political icon in the turbulent late 1960’s. Angela Davis joins the Communist Party, protests with the Black Panthers, and becomes a principle spokesperson for the burgeoning prison reform movement. As a result, she finds herself Fighting to keep her job, and in the national media spotlight characterized by her many detractors as a dangerous subversive menace, and by her supporters as a strong leader challenging authority and boldly advocating for “Power to All People.” So on August 7th, 1970, when Angela is implicated in the politically motivated kidnapping and murder of a judge in a brazen daylight shootout at the Marin County, CA courthouse, the nation wonders and Newsweek magazine asks: “What would prompt the daughter of the black bourgeoisie to take a desperate turn to terrorism?” Angela flees California, convinced she will not be given a fair trial and is placed on the FBI’s 10 Most Wanted list. After a national manhunt she is captured two months later in New York City. Charged with murder, kidnapping and conspiracy, Angela is put on trial in one of the most sensational court cases of its time. After a two-year legal battle, an all white jury acquits her on all charges in 1972. It’s an edge-of-your seat thriller told for the first time by Angela and others who lived through the events firsthand. The interviews recount the politics that led her to challenge authority and spur a worldwide movement for her freedom that cemented Angela Davis, and her signature Afro hairstyle, as an iconic symbol of this still relevant political and social movement — the right to challenge the system. Free Angela is a must see documentary! A candid and powerful account of the tumultuous times and a woman who challenges a society that is afraid of all that she represents. Filled with elements of intrigue, suspense and conspiracies, the film delivers by empowering and inspiring diverse international audiences with its message of hope and redemption. You know her name. Now, you will finally know her story. Follow the conversation on Twitter! #FreeAngela

0 0 0 0
Previous : Burst of violence over Memorial day weekend brings total number of shootings to 41 since Boston Marathon; 16th Homicide of the year
Next : Quote of the Day