According to Universal Hub, a couple was shot in a car in Dorchester at Devon Street and Vaughan Avenue at around 2PM Monday, June, 17th 2013. The male and female victims, both in their early 20’s suffered gunshot wounds to the leg. An infant in the car with them did not appear to have been injured. The BPD reports both victims to be expected to survive and the baby was unharmed. All three were taken to a local hospital for treatment.

Another shooting on a man, woman and child in a car on Tuesday night at 212 Norwell St. left the man with gunshot wounds. He is being treated at Boston medical center and is expected to survive.

According to the woman, who, like the child, was unhurt, a black SUV pulled up beside them around 7 p.m. and somebody in that vehicle opened fire.

There was also a shooting yesterday on Creston St in Dorchester. Nothing is known at this time about the victim, the investigation or any suspects.

This brings the total number of shootings in Boston to 66 since the 2013 Boston Marathon.

View our Live Map / List of Shootings since Boston Marathon. 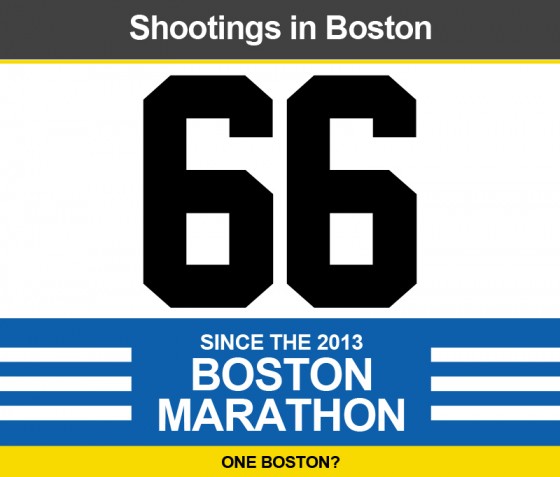 View the most up to date info on our Live Map / List of Shootings since Boston Marathon.

Note: This information is gathered from multiple sources and may not reflect the most up-to-date condition of vicitims nor the status