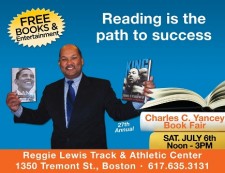 The book fair’s theme, “Reading is the Path to Success,” represents the belief that every child needs support, encouragement, and nurturing not only from their families, but also from their teachers, business leaders, elected officials, and community activists. “The whole point of this book fair is to encourage a sense of independent learning on the part of all the people of Boston,” said Boston City Councillor Charles C. Yancey.

Councillor Yancey noted that he and his wife, Marzetta, launched the book fair on February 28, 1987 to promote literacy and to encourage love of reading among Boston youth.

The first book fair was held at the Codman Square Library, which it quickly outgrew. It has since been held at the Carver Post, Prince Hall Grand Lodge, and most recently at Roxbury Community College’s Reggie Lewis Track and Athletic Center. “The fact that we’re at the Reggie Lewis tells me the people in this community value education,” Yancey said.

Marzetta Yancey said she was proud of the young people who attended, acknowledging that they could have been doing other things on a Saturday afternoon. “We’re hoping that young people are building their own libraries at home,” she said.

Dr. Carol Johnson, superintendent of Boston Public Schools, thanked Charles and Marzetta Yancey and the team of book fair volunteers for working to improve literacy in the City of Boston. “It’s just such an inspiration to see so many parents, grandparents, cousins, sisters, and brothers coming to get a book. The fastest way to learn to read is to have a book in your hand,” she said.

Mayor Thomas Menino, speaking during the 2007 Yancey Book Fair, called the event spectacular. “This is the vision of Charles Yancey to make sure kids have books to read. Because if kids don’t, then they cannot dream and cannot think,” he said.

Lynnette Frazier, Yancey’s chief of staff and book fair coordinator, said the book fair involves fundraising, recruiting volunteers and entertainers, purchasing books from publishers and book stores, as well as ordering tee shirts and backpacks for volunteers and participants. Call Lynnette Frazier at 617 635-3131 to volunteer, to donate new books, or to make a financial contribution.

The Yancey Book Fair has distributed over 500,000 books to over 20,000 children and families since its 1987 inception. It has also donated thousands of surplus books to Boston Public Schools, and to children in Ghana, Barbados, Guyana, Jamaica, and Trinidad.

Yancey noted that successful citizens often attribute love of reading as a contributing factor to their accomplishments. “We have a responsibility as adults to inspire our children to read, to learn, and to contribute positively to this society and this world,” he said.

0 0 0 0
Previous : Quote of the Day
Next : Seeking a Brazilian male soccer legend to play Pele