Even though I was recently accused of being a “Knuckle head” I am no dummy.  Many people have asked me, aren’t you concerned about retaliation when you publicly critique people like Suffolk County DA Dan Conley, Mayor Menino, Police Commissioner Ed Davis and institutions like the BPD?  The answer is simple. Yes I am concerned for my safety and well-being, however that cannot prevent the truth from being told, hard issues being discussed and examining every possible factor in the continued oppression and discrimination of my people.

I realize more than most that bad things start to happen “coincidentally” when you start to shove your thumb into the eye of the dragon. In 2002, when I was vocally critical of the then several BPD shootings of civilians within one year, many ending in fatalities, I experienced death threats, general threats via phone/email, attempted character assassinations by local black “leaders” and media. This resulted in serious damage to my ability to find employment and pushed me into an emotional state of depression and paranoia.  My paranoia was off & on both real and imagined. Sometimes when you think people are out to get you, they really are out to get you.

My suspicions were proven right when I was mysteriously shot at my own home by 2 unknown assailants. Fortunately, I was able to prevent the 2 would-be intruders from getting in my house by fending them off with a machete at my back door.  About 4-5 shots were fired, one through the door I was braced against.  Luckily, I lived to tell the story with only a shoulder graze and my friend who was at my home with me was shot in the leg.  Strangely, the police arrived quicker than I have ever seen before and the first officer on the scene was the head of detectives.  Despite my pleas, no one took any fingerprints of the 2 large, plainly visible full hand prints which were on my bathroom window from their attempts to get in. To this day myself or my friend has never been questioned other than that night briefly as to what happened, we have never heard any progress in finding the suspects and to this day I have no idea who shot me and my friend.  Even more strange is that the police then made me a suspect in a concocted “drug deal gone bad” scenario where they insinuated I either knew who shot us or perhaps shot myself and my friend.  Long story short I got framed, they “found” drugs in my home and soon I had a wanted poster of my very own and was indicted.  END OF THE STORY: NOT GUILTY.

The reason I tell this story is to illustrate and acknowledge that bad things start to happen when you are rocking the boat.  In the past few weeks as we have been publicly critical of BPD Commissioner Davis and Suffolk DA Dan Conley, already things have happened that I could easily attribute to my latest critiques.  In the last week I have received a summons for Child Support Court and a summons for Jury Duty.  This could all just be a coincidence or this could be the beginning of an attack on me to question my credibility and neutralize my efforts in an attempt to silence me.

This tactic has been used before and I am well aware of the dangers associated with speaking out.  All I can say is that while I of course hope to avoid any and all pitfalls, I am prepared to deal with whatever comes my way and I will not be deterred from the overall objective of speaking truth to power regardless of the personal consequences.  My eyes are wide open.  I am unafraid and have considered the repercussions of truth telling. Frankly, I am more afraid of what happens if I stop doing what I’m doing than I am of what happens as I continue.

I submit to you my wanted poster from the situation I described above and ask the obvious question that I myself would ask of anyone else: “THIS GUY IS RUNNING FOR CITY COUNCIL?!?!”
The answer is YES.

Now that I have publicly announced my campaign for District 7 Boston City Council I fully understand that the chances of retaliation against me have dramatically increased.

“You have enemies? Good. That means you’ve stood up for something, sometime in your life.” – Winston Churchill 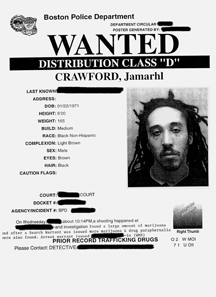 0 0 0 0
Previous : Police Shootout with Suspect on Seaver St.
Next : Quote of the Day