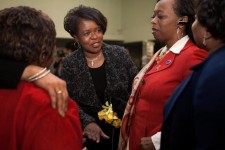 Mayor Martin J. Walsh went off script at last Thursday’s event, recognizing his “dear friend” at Table 2. State Representative Gloria Fox described her as a sister in politics and said they had been an “unbeatable team.” And former state representative Willie Mae Allen, just before handing this guest her plaque, said, “We’re depending on you.”

Accepting was former state senator Dianne Wilkerson, once the highest-ranking black woman in state government but recently inmate No. 21757 038, convicted of accepting $23,500 in bribes.

It was the first time many had seen Wilkerson since her release from a federal prison in Danbury, Conn., in September, and it was a homecoming few ex-offenders receive when reentering society. Not only did the Prince Hall Grand Chapter Order of the Eastern Star Jurisdiction of Massachusetts Inc. honor her at the Grove Hall event, but MassEquality will also recognize her among a slew of other champions of gay marriage at an event later this week.
READ FULL STORY HERE:
http://www.bostonglobe.com/metro/2014/02/26/wilkerson-honored-she-emerges-from-prison/JNXjdmqobTtaBEHAauPecO/story.html

0 0 0 0
Previous : BPD Crime Stats: Shootings, Arrests Remain at Steady Rate But Far More Deadly Than Last Year
Next : These apps get the message — and then erase it