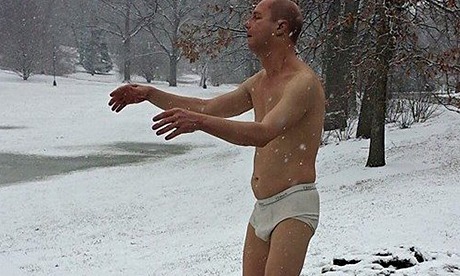 On the campus of Wellesley College there has been erected a very unique statue that is causing quite a stir.  The artist who made the statue dubbed it “The Sleepwalker” and after the initial controversy it has become a campus conversation piece.  College administration who first wanted the statue removed have now changed their tune and allowed the statue to remain.  The female students on the campus who initially were “creeped out” by the eerily human like statue have now done an about face and are now posing with the statue for “selfies” which have made the rounds on the internet.

The statue itself is a life-like depiction of a middle aged white man dressed only in tighty-whitey style underwear, with his eyes closed and arms outstretched in a zombie like pose.  The question for the Blackstonian network is simple: What would the reaction to this statue be if it was a Black man? In the racial climate of America as a whole and locally here in Boston and suburbs like Wellesley, I think the reactions would be quite different.  After cases like Trayvon Martin and Jordan Miles it is not a huge leap to think that if Massachusetts had similar gun laws to Florida a Black statue might already be riddled with bullets.  I can imagine police officer shouting commands to “put your hands on your head” and “lay face down on the ground” to which of course the statue could not respond which might result in a tasing or a shooting by police.  This is a serious question for all of us to ponder. What if the Sleepwalker statue was a Black man?

0 0 0 0
Previous : Nothing New Under The Sun: Wilkerson Established Commission to Study Black Men in 2008
Next : You can’t delete Dianne Wilkerson from memory