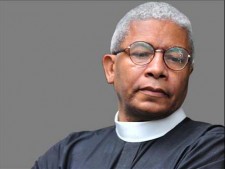 In the most recent edition of the Bay State Banner Editor Yawu Miller penned a scathing critique of Rev. Eugene Rivers, a highly visible and equally controversial figure in the Black Community.  Rev. Eugene Rivers and Banner Publisher Melvin B. Miller have publicly clashed before. Most notably during the media storm the ensued after the revelation of financial difficulties with Charles St. AME and One United Bank, Rivers was highly critical of Melvin B. Miller who is a One United board member who wanted to foreclose on the historic church.

Fifteen years ago, the Rev. Eugene Rivers was at the height of his influence with his face on the cover of Newsweek magazine, his frequent critiques of Boston’s black political and religious readers appearing frequently in the pages of the Boston Globe, Boston Magazine and the Boston Herald.

At the peak of his powers, Rivers raked in hundreds of thousands of dollars in charitable contributions for his nonprofit Ella J. Baker House, controlled a formidable block of summer jobs for the city’s youth and enjoyed a steady flow of state and federal dollars for his anti-crime initiatives.

For many, it may be hard to square the ‘90s version of Gene Rivers with the contemporary minister, now taking a drubbing for his apparent bid to shake down a state contractor, Keolis North America, for $105,000. In the ‘90s, Rivers was tapped into the corridors of power in influence. Compared to the high-rolling Rivers of the last decade, today’s version appears as if he’s fishing for loose coins under couch cushions.
READ FULL STORY HERE: http://baystatebanner.com/news/2014/apr/16/rev-eugene-rivers-courts-controversy-stays-media-s/?page=1