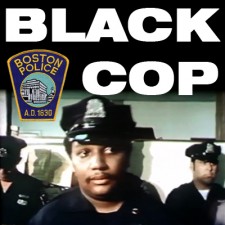 “A documentary about the black cop–the attitudes of the black and white community toward him–the problems he has inside the department. Location footage followed the black cop into typical situations.”–1975 Peabody Digest.

Black Cop is a film documentary that shows the lives of individuals who are caught inexorably in intense community pressures that arise because they are policemen, and become magnified because they are black.
Black Cop was filmed over a period of months by a WCVBTV
film crew. All material was shot on location; all was spontaneous.
Statistics quote in the program were supplied by the Boston
Police Department.

Awards: Winner of a 1975 Peabody Award, to WCVB-TV for “a viewer-oriented programming package which exhibits a quality of service too rarely seen in today’s television.”