We look back at transportation equity nearly a decade after the first Silver Line buses started running replacement service along the old elevated Orange Line route down Washington St. from Dudley Sq. to Downtown.

There is also some interesting information in the MassDot Roxbury, Dorchester, Mattapan Study from 2012.

Equal or Better: The Story of the Silver Line

Racial Disparities and the MBTA

BOSTON — The door closes behind me and I slip $1 into one slot and 50 cents into another. I’m on the #28 bus heading to Dudley Square. Many residents of Boston’s Black and Latino neighborhoods who use mass transit each day pass through that historic depot. The station, among the city’s oldest, is located at the heart of those communities, and all area buses — like the road to Damascus — lead there.

The problem with elevated rail

Beginning in 1901, Dudley was the main stop for direct train access in Boston. Like Chicago’s famous “L,” the Orange Line traveled above the city on an elevated rail line until it was torn down in 1987 and moved to the Southwest Corridor. It’s what happened after that that has made so many people in Boston’s minority neighborhoods question the fairness of mass transit policy.

Those questions are the subject of a recent documentary titled Equal or Better: The Story of the Silver Line, by Kris Carter. The film maintains that a promise was made to replace the old Orange Line with equal or better transportation options. But the service that replaced the elevated T was a bus, the Silver Line, which can take more than half an hour to get downtown. The elevated rail got you there in 10 minutes.

“Even though it’s cheaper to throw up some steel and put the train up overhead, there’s a lot of social costs to that,” Sterman said. The old elevated rail line also literally cast a permanent shadow over houses and business along Washington Street.

Arriving at Dudley at rush hour, Camera Core said though she’s not all that nostalgic about the old elevated train, it was easier and more reliable getting back and forth from downtown than buses. “It’s just always late,” she said as her bus finally pulled into the station.

Alejandra St. Guillen leads the Massachusetts Latino Civic Education Organization from offices just blocks from Dudley. She asked, “Why can’t we go underground in the places that are really crowded and come up for each stop, which would facilitate the traffic and really allow for direct access in town instead of having to take two buses or take the bus and the Silver Line, which is really just another bus?”

Getting to the workplace, whether urban or suburban

Marilyn Swartz Lloyd heads up MASCO, the Medical Academic Scientific Community Organization. She said Latino and Black activists in Boston have long pointed out a disconnect between minority neighborhoods and historic transportation policy, and that with cutbacks in service it is more important than ever to ask questions.

“How do you get people to work in their neighborhoods to the larger areas like the Financial District and the Longwood area, so that they have jobs and so that it takes them as short a period of time as people who are going on the direct spokes on the wheel?” she said. “You have to have more transportation that ties the spokes together and I think that it’s particularly true in the Longwood area, where the highest population of our workers are from Dorchester and Roxbury.”

As many as 104,000 workers, students, patients and vendors pour into Longwood each day. According to MASCO, about 20 percent of employees who work in the medical district would be affected by cutbacks, including the elimination of two bus routes.

But it’s not just downtown Boston and inner-city job centers like Longwood that are dealing with how to get their workers to their desks, stations or machines.

Harvard sociologist William Julius Wilson wrote the seminal book When Work Disappears. He said there is a mismatch between many new jobs — which are in the suburbs — and the people who need them most.

“80 percent of the entry-level jobs are located in the suburbs,” he said. “And, therefore, a lot of people really depend on transportation to get to the jobs. The lack of feasible transportation, however, exacerbates this mismatch because the lack of transportation options not only increases reliance on automobiles, it also makes it difficult, very difficult, for those without cars — particularly inner-city residents — to get to suburban jobs.”

That’s a catch-22. You might say, “Well, there is commuter rail.” But most MBTA rail service was set up to get suburbanites into and out of the city and not the other way around.

“The Brookings Institution actually did a big study last year and they specifically looked at how well the transit system served jobs,” said Stephanie Pollack of the Kitty and Michael Dukakis Center for Urban and Regional Policy at Northeastern University. “And we weren’t .the best and we weren’t the worse. We were in the middle of the pack.”

Even so, it’s going to take some major planning to alter the way we think about transportation and jobs, especially as it affects the poor and minorities, she said. “So we need to both make the transit system better serve the places where jobs are and where people are who need those jobs, and we need to change land use policy so that we make sure that when we’re locating new jobs in the region we put them in places that folks can get to on transit.”

Swartz Lloyd and others are calling on companies — public and private — to step up efforts to provide transportation to and from transit stations for workers and job seekers without the means to get to those jobs. “I think just like the private systems are working to pick people up from train stations and at subway stops, there may be some way that we can all interconnect as well,” she said.

It’s estimated that companies to subsidize the cost of transportation for their workers are spending as much as $40 million. Waiting for a bus, commuter Sean Walker said that’s the only way he could afford the rising costs of getting back and forth from his home near Ashmont Station to his job: “I got a pass for both the bus and the train, so it’s about 60 bucks.”

But he’s still dealing with the lingering problem of time. He works near Symphony Hall and lives near Ashmont Station in Dorchester. “It takes me overall an hour,” he lamented. “In some areas if you don’t catch [a bus], another won’t come for half an hour to 45 minutes. ”

Alternatives to the bus

African Americans, Latinos, Cape Verdeans and Haitians are heavily dependent on bus service. MBTA ridership is estimated at around 400,000 per weekday, with the heaviest passenger concentrations in Roxbury, Mattapan and Dorchester.

Boston city councilor Charles Yancey is lauding a joint MBTA and community plan to provide minority commuters more direct rail access, getting them from Mattapan to downtown in 20 minutes rather than 60. “It’s called the Fairmount Line, which runs right through the heart of the communities of color from the Newmarket down to Mattapan Square,” he said.

The crown jewel of that plan is a new station that will be located off Blue Hill Avenue near the Cummings Bridge. The station will include a modern platform with wind screens and a message board announcing train arrivals.

“I also believe that we should improve the connections with Dudley Square and ultimately in the future we should have a Green Line–type of LRV type of operation running from Dudley Street all the way downtown,” Yancey said.

Still, for those who rely on buses to get home, to school, to work or in search of employment, the amount of time it takes to get there leaves many frustrated. Some on that day passing through Dudley Station thought back to the time when the elevated trains pulled up to the platform and headed downtown. It was not the best system, but it was faster. 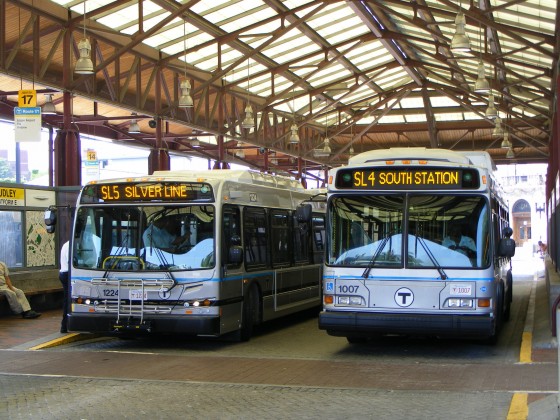