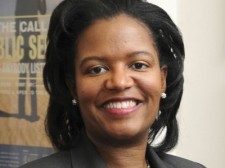 State Rep. Linda Dorcena-Forry won by a margin of 378 votes over her colleague State Rep. Nick Collins, earning  10,214 out of 21,730 total votes for the 1st Suffolk Senate Seat. This victory sent shockwaves through the once formidable political base of South Boston with many bitter observers blaming Collins’ loss squarely on the shoulders of fellow Southie candidate Maureen Dahill (1,593 votes), who just by running committed the unpardonable sin of “splitting the vote” and thus provided the margin Dorcena-Forry needed for victory. Whether or not this theory is true, we don’t know. We cannot just simply assume that all those who voted for Dahill would have automatically voted for Nick Collins. To do so would be a cynical suggestion that here in One Boston, people still vote along racial lines. Can we also assume that maybe, just maybe some of the people who voted for Dahill could possibly be… women? or dare I even suggest Black? How about the most disconcerting thought of all, I shudder to even utter it, could Linda Dorcena-Forry actually have won because she was the better candidate with more experience and worked harder? Heavens to Betsy.