Yesterday, as many of you who joined us know, the Blackstonian organized a “Rally for Solutions” at City Hall Plaza to address violence in the city. We were motivated by our count of the shootings since the Boston Marathon passing the tragic milestone of 100 since April 15, 2013. 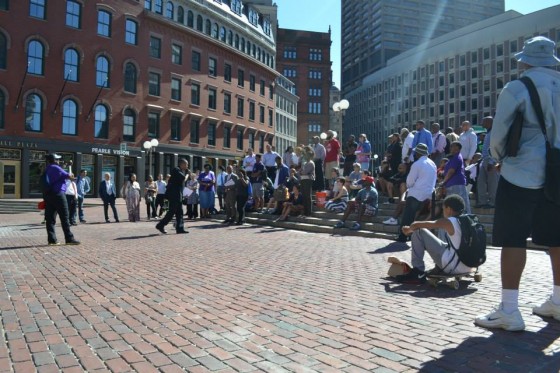 Over 100 people joined us to offer their support, express their concern for this issue and present solutions to city government, law enforcement and the community at large. Present were members of Voices of Liberation, Organize the Hood Boston, 10,000 Strong Boston, BloodSkinLand Productions, Young Gifted and Black Movement, Grassroots Grind Group, Pen & Sword Political Pirates, Greatest Minds, National Black College Alliance, Mothers for Justice and Equality and many more community organizations as well as concerned citizens of all ages, races, ethnicities, denominations and sexual orientations. There were several elected officials who were in attendance including City Councilor Charles C. Yancey who participated in the speaking program along with Minister Kim Odom and others, adding their solutions to those presented and documented in the video below. Following the rally, a group of 47 of us remained to go to the mayors office and demand (again) a public meeting with Mayor Menino and BPD Commissioner Ed Davis where the community can present their ideas and concerns about violence and policing. A member of the Mayor’s staff informed us the Mayor was out but assured us she would relay the message. We have since reiterated the demand in writing and included the ideas presented in the video below: 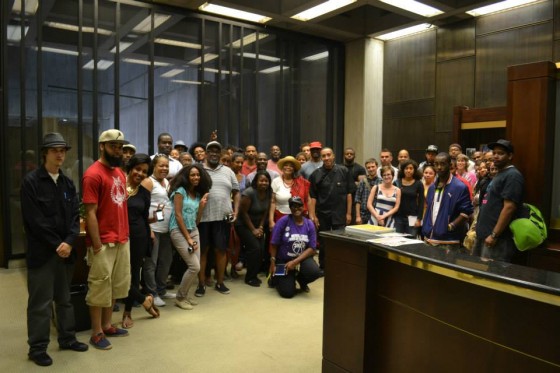 Photos from the event can be seen on the Blackstonian Facebook page.

The event was covered by Boston Magazine and The Boston Globe.

Residents are calling on members of the community to come together in a show of unity on the steps of City Hall to seek solutions to the ongoing gun violence in Boston, after the shooting toll since April 15 recently reached 100 incidents and counting.

“This is a rally for solutions—we are trying to get a real platform for real ideas and policies, not just rallying about the violence that has long been ignored,” said activist Jamarhl Crawford, publisher and editor of the website Blackstonian.com.

Crawford said there is a drastic disparity between what happens to black and Latino people, and what happens to “white counterparts” in terms of how people react to violence in Boston, and that Monday’s rally is meant to put the spate of violence on the forefront of peoples’ minds by using the “sad, sick milestone” of the 100-plus shootings to highlight the “devaluation” of the lives of people in the urban community. “For some reason, black and Latino life in the urban city environment is devalued. There are ‘abnormal’ acts of violence, and that’s what gets attention, as with my community, however, [violence is] almost expected. It’s become ‘normalized,’” he said. “I want people to see we are regular people too. If you prick us do we not bleed?”

The “Rally For Solutions” will begin at 3 p.m. at Government Center, and last roughly two hours, highlighting the notion that “no life [is] worth more than another and one life lost is too many.”