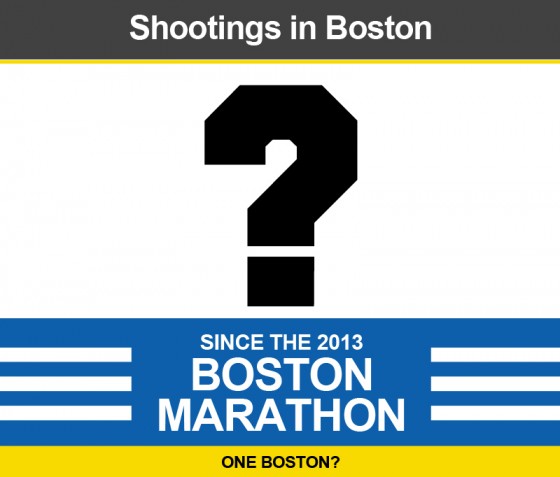 In what has been one of the most violent Januarys in recent years, the post-election afterglow has faded and many are beginning to ask if the promises for a new Boston, especially a more peaceful and equitable one, are being delivered on.

Mayor Walsh entered office saying what many had long wanted to hear, that violence in any neighborhood is unacceptable and that the city needed to bring all its ideas, agencies and resources to bear to tackle this critical issue. Beyond good sounding rhetoric we can all agree on, has Walsh made substantive moves to really make an impact on crime, violence, guns and policing?

In his inaugural comments Walsh said “The first thing is probably going to be sitting there going, ‘Oh my God!’ I think that’s probably the first thing that I will do. The second thing will be to have a meeting in my office to talk about some of the violence and crime in our city.”

Walsh “highlighted violence prevention in his first mayoral address at a packed Conte Forum on Monday morning” according to the Dorchester Reporter reinforcing that it would be at the top of his list and combating what some had perceived was a lackluster commitment to the issue earlier in the campaign.

His recent appointment of Bill Evans as BPD commissioner and the swearing in of “the most diverse BPD command staff in history” (although we know it has never been very diverse) was seen by many as an effort to bridge the divide that undeniably exists between the Boston Police Department and many of the communities they are supposed to serve. While it is clear that better a police-community relationship is part of the answer. Some, including members of MAMLEO (who had submitted a list of qualified candidates of color for consideration for the post of commissioner), were underwhelmed by what appeared to be changing the window dressings rather than the significant changes many feel are necessary.

I was working at Boston Medical Center when Marty came and toured the hospital’s facilities. Walsh met with members and patients of the Violence Intervention Advocacy Program about their work to treat the root causes of violence in victims lives, sampled food from the food pantry and then addressed a large group of us in the lobby. Again, Walsh spoke with passion and poignancy about the gravity of addressing violence and his intention to support the work of organizations like BMC and VIAP and his desire to use their models to build other successful programs.

Reportedly, “at one of his first meetings in the mayor’s office, Walsh convened ministers and other antiviolence advocates to address shootings and mayhem that plague pockets of the city.” although who specifically was invited was not diclosed the meeting primairly was attended by directors of some of the prominent agencies and organizations in the city like DYC, Mothers for Justice and Equality, The Boston Foundation and Street Safe.

However what exactly has come from these closed-door meetings, apppointments and tours is the subject of some debate. Many who have been given a voice and seat at the table are thrilled by the mayors engagement and support while others who have been excluded from the process many of whom have been ignored since before Walsh took the rigns are frustrated by what seems like superfical change that has done little to make a difference on the streets.

A problem as complex and serious as violence in our streets cannot be solved overnight and there is still hope that a fresh administration and approach will make a difference, but the clock is ticking. What Will Mayor Walsh DO about violence and will he do it soon enough and publicly enough.

He inherits a reputation (unfortunately well earned) of a city government and police force that lacks openness, transparency and the ability to take criticism around tough issues like this. While there was strong support and collaboration with some, anyone who had anything to say besides yes and thank you was pushed out of the process.

If Walsh is to be the mayor to “listen, learn, lead” will he listen to those voices of dissent and discontent? Will he reach out to the biggest critics? Will he open this process up to the public, not just stakeholders with titles and organizations and positions, but everyone?

Will he agree to the “Black and Blue” open town hall forum between the BPD and community that the Blackstonian has been trying to get the BPD to agree to (and commit to showing up to after agreeing) for 5 plus years?

Will he do something new and innovative to solve this problem or drop the ball on his first, and perhaps most important campaign promise? Only time will tell.

As of last night, Mayor Walsh has made a public statement about violence in our city, specificially the most recent round of shootings and murders:

We cannot become complacent to the death of any young person in our City; we need to stop these events from happening in the first place.

Today, I asked Boston Police Commissioner Bill Evans, Chief William Gross, and Gang Unit Officer Bobby Merner to brief me on recent violent events in our City. Here is what we know:

This time last year, Boston had seen 15 shootings and 2 gun fatalities. Since January 1st of this year, we have seen 13 shootings and 8 gun fatalities.
The last four shootings are likely related, and are a combination of gang violence and retaliation. It is the understanding of the Boston Police Department that there were prior relationships between the victims and the suspects.
There was also another nonfatal shooting today in Jamaica Plain, and thanks to the efforts of Boston Police and the community, a suspect is now in custody.
In the coming days, I will be convening several groups to discuss actions we can take in several of the areas that I discussed with Commissioner Evans and his Command Staff. We will work with all levels of government, law enforcement, and the community to reduce the trauma in our neighborhoods, get guns off the street, and address the underlying causes of violence.

While there is no single solution, improving public safety is among my highest priorities. This kind of violence cannot become commonplace; we should be shocked every time we hear of another shooting, of another death in our community.

Interview on WBUR from September

WBUR: In recent years there’s been a lot of, sort of feel-good stories about the overall crime rate coming down. But as you know, there are pockets in this city that are still plagued by violence. So for many families and parts of Dorchester, Roxbury, Mattapan, statistics about low crime rates are meaningless if people are still being shot in the street. So how do we make Boston a safer city for everyone, for all communities?

Walsh: Well, we’re not gonna police our way out of this problem. We’re looking at this as a public health problem. What my campaign’s proposing is to go into the neighborhoods almost like a political campaign, go into different people’s houses, knock on doors and find out what the challenges are as well as doing it back in the school.

When we passed education reform, we were supposed to have wrap-around services for some of these families and we don’t have them. So a combination of the wrap-around services for the young kids that are in our school system currently and also going out and identifying the challenges and the needs of some of these young people have that are creating the violence — a lot of these kids are addicted to drugs. A lot of these kids have no future. They have no education. A lot of these kids, it’s intergenerational poverty. So really have to go out and do a full, comprehensive look at it. You know we can’t let another generation of kids be lost to the street. You just can’t.

More Articles about Walsh on Violence

Marty Walsh On Overcoming Challenges And Taking On Violence In Boston

Marty Walsh Lays Out Plans For Fighting Crime In Boston