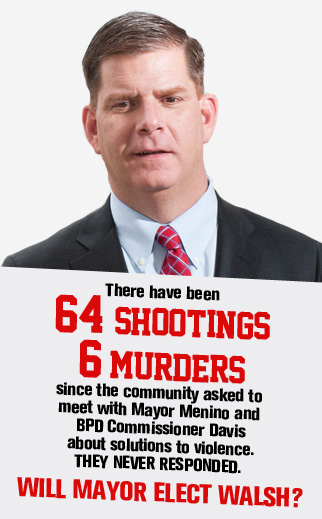 With the departure of Mayor Thomas Menino and BPD Commissioner Ed Davis there has been much discussion around the legacy these men leave behind and the enduring impact of their time at the helm of our city. While they have received high praise from many there has also been strong criticism from communities that often felt like their voices and concerns were marginalized.

In our article “No Reply to Community Meeting Demand on Violence from Menino and Davis” we detail how both the mayor’s and former commissioner’s offices never returned calls from community to meet publicly about public safety and policing, even after over a hundred people rallied on City Hall Plaza to present their ideas and solutions before occupying the mayors office and meeting with staff who assured us they would reply promptly.

With Ed Davis having officially left his post and Menino already preparing to pass the reigns to Mayor-elect Martin Walsh, it remains to be seen if Boston’s new mayor will be able to deliver where Menino and Davis failed.

Walsh made violence and equity central to his campaign and vowed to unite the city making “one Boston” reality not rhetoric. We only hope he and whomever is appointed as commissioner takes the suggestions and ideas of concerned community members who live this first-hand and not run away from responsibility to these constituents as many feel his predecessors did.

Video from “Rally for Solutions to Violence”

Read the Letter we sent Menino on August 6th