As of at least Sunday March 20, 2022 the historic “Faces of Dudley” mural and a new one just recently completed in Grove Hall have both been vandalized. It is unclear when exactly the murals were defaced. We here at Blackstonian first noticed the Nubian Square mural had been attacked this past Sunday during our weekly Feed the Hood distribution and we learned the same thing had happened in Grove Hall when we contacted our editor Jamarhl Crawford who also happened to coordinate the Grove Hall Mural project.

“Noticing that at 1PM on a Sunday hurt my heart” said community organizer Derrel “Slim” Weathers who noticed the defaced mural as we made our approach to Nubian Square. I went up to take pictures and as I was documenting what had been done to the mural I was approached by @Hildelight, a community member and Journalist for SpareChange News. She too expressed despair at the situation asking “Who would do something like this?” before posing for pictures in front of the defaced mural asking us to “please spread this wide; Twitter, Facebook, everywhere.” 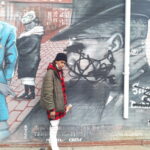 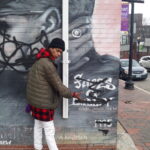 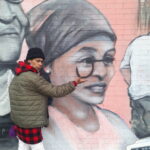 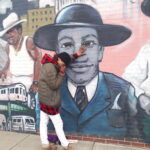 Titled “Faces of Dudley Old and New” the Nubian Square mural highlights historic figures like el-Hajj Malik el-Shabazz better known as Malcolm X alongside portraits of the everyday people of Boston in and around Dudley Station / Nubian Square. The Mural which is almost 20 years old was created by a B.Y.C.C. mural crew led by Brooklyn Based artist Michael “Hops” Womble who recalls: “1995, it was myself & heads like my brother Barrington “Vex8” Edwards, Cedric “Vise1” Douglass, Rob “ProBlak” Gibbs, Ricardo “Deme5” Gomez, Greg Bernstein, my brother Bounce, my wife, my mom and step-dad and the young students of the B.Y.C.C. Mural Crew. We all worked to add & keep a piece of history in the community.” 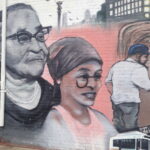 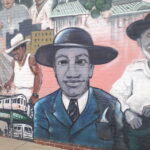 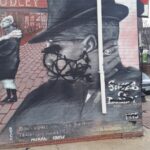 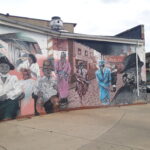 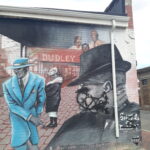 It was restored in 2015 with funding by the Boston Arts Commission.

When contacted about this incident Hops went on to say that he is “disgusted by the ignorant toy actions” and added “at this moment of the mural’s defacing, I’m open to any & all who can assist me & those who would like to contribute to fix & upgrade the mural again”. 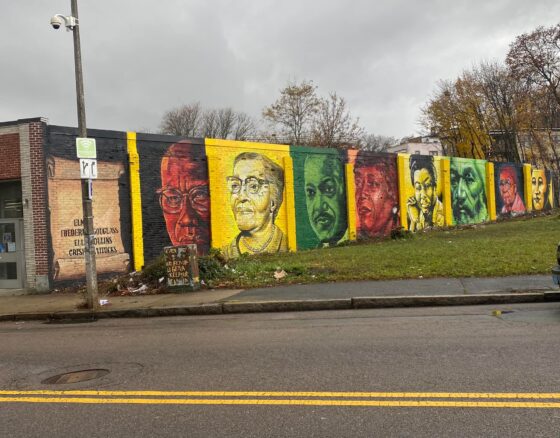 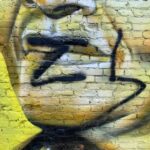 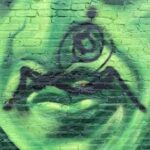 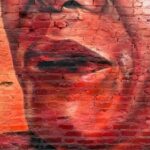 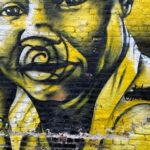 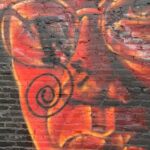 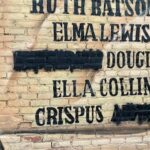 Crawford, a long time community activist, said “any vandalism to this degree is an affront and act of cultural defacement and whoever did this is clearly unstable and while we do not know if this is an act of racially motivated hate, or intimidation, jealousy, some lost drunk, a young kid… but whatever happened this is an act of defacement and these type of artistic, culturally iconic murals old and new should be considered untouchable and everyone in community should know these are sacred and protect them.”

At the time of publication this story is an ongoing development and authorities are investigating the matter.