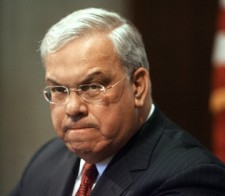 On Aug. 5th over 100 concerned citizens joined with us for “The Rally For Solutions” at which we discussed proposed solutions for violence 47 of those remained to go to Mayor Menino’s office to call for a meeting with the Mayor and Commissioner Davis to publicly discuss proposed solutions to combat violence.

Many have inquired since then has there been any response since then. We are disappointed to report the not only have we heard nothing back from either Mayor Menino or Commissioner Davis but our repeated calls to the Mayor’s Office (5 calls) have not been answered as of yet.

HERE IS THE VIDEO OF OUR RALLY FOR SOLUTIONS FROM AUG. 5

Rally for Solutions Aug. 5 City Hall Plaza
Over 100 people gathered on City Hall Plaza for the “Rally For Solutions”
and 47 of those remained to go to Mayor Menino’s office to call for a meeting with the Mayor and Commissioner Davis to publicly discuss proposed solutions to combat violence.

HERE IS A COPY OF THE LETTER AND PROPOSALS WE SENT TO THE MAYOR’S OFFICE:
LOOK AT THE PDF VERSION HERE: Menino Letter August 6th
OR READ BELOW

In light of the recent morbid milestone of 100 shootings in Boston since the tragedy of the Boston Marathon over 100 citizens from all walks of life, races, ages, genders and sexual preferences gathered on City Hall Plaza to address the violence in our community and publicly state our ideas for solutions to these problems. We are at a critical time in our city and we find ourselves in this position every year and therefore 47 of us came to your office in an unified effort to demand a meeting with yourself and Commissioner Davis in a public community setting organized by our group to discuss these proposed solutions to violence and crime. An open public setting like RCC, or Reggie Lewis or Hibernian Hall where everyone is familiar and comfortable would be appropriate.

While we must have some tough discussions our intent is to be clear, fair and provide solutions to the violence while examining any existing barriers to the all hands on deck type of cooperation that is needed. The plain fact is that many people are concerned and want to see more done to address this issue. I don’t have to tell you that often some of the most innovative ideas come from the diverse brain pool that exists in our city. It is exactly this wealth of experience and overwhelming compassion that we have tapped into in order to “Rally for Solutions”

Please get back to our group with times and days that would work for yourself and Commissioner Davis as soon as possible so we can plan adequately and hopefully have this public meeting within the next 30 days or so.

Please find attached the proposed solutions that emerged from the rally as well as my own pre-prepared ideas for combating violence and crime.

1 – Hire “Army of mentors” – 300 youth, street outreach workers – intervention before youth encounter problems – violence – dropout. 10 yrs of proposing this to city council, denied over $  – HOWEVER in that time city spends 40 million on BPD overtime, 30 million is the OT budget so the OVERSPEND 10 million every year. that is the same cost of hiring the 300 mentors.

4 – Use $ from drug busts to support programs for peace, drug treatment, youth community, etc. Not serve as a piggy back for DA and BPD

5 – accountability for all city govt. especially police, need a civilian review board with subpoena power – police should be subject to same justice as everyone else – police are not capable of policing themselves

1 – Violence is a public health issue, – we need a curriculum of anti-violence, conflict resolution and recovery from the trauma of violence

3 – Education not an umbrella term, need to talk abt racism need to study racism – have developed curriculum of racism and its effects – it is available and should be utilized.

y Boston Police Kiosks
Based on identified hot spots the proposed kiosks could be permanent installations such as Downtown Crossing, or more cost-effective and efficient, mobile kiosks from repurposed construction trailers. We can ask developers who do business in the city of Boston and enjoy various perks to give back to the community by providing trailers to the BPD which can serve not only as crime prevention and response units but can also provide community services like paying tickets and information centers. As impact is made and hot spots change these trailers can easily and cheaply be moved to a new location in need.

yCivilian Review Board & CO-OP
Mayor Menino established the Community Ombudsman Oversight Panel (CO-OP) in 2008 in response to community cries for a civilian review board to oversee the BPD. The CO-OP is made up of legal and criminal justice professionals and does not reflect everyday citizens. I propose that the CO-OP is strengthened, given the powers of subpoena and independent investigations and in addition to the CO-OP I also propose the formation of a true Civilian Review Board made up of interested community members from all walks of life, which will work in tandem with the CO-OP.

y Diversity in the BPD (also listed under employment)
I contend that more diversity in the BPD would also translate to better relations with the community and serve to solicit more witnesses, solve more crimes, help curb violence and stem police brutality.

y Prisoner Network
Maintain contact with a network of those currently held within County Jails and State Prisons. The reason for this network is two-fold 1) To benefit the community by harnessing the power of those currently incarcerated and get their ideas and support in stopping violence and street beefs. 2) To benefit the individual by making sure he/she is receiving services inside and upon release has the proper support system to combat recidivism, as well as to monitor conditions in the state run facilities.

y Hot Spots Outreach
Asking the BPD to release its list of designated so-called “Hotspots” for a targetd outreach in conjunction with the outreach to impact players.

y Gun Tracking
Every gun that is taken off the streets of Boston should be catalogued by make/model along with make/model of the ammunition. This data needs to be made available so we can determine if there are trends in which guns are being used more which could lead to legal actions to encourage gun manufacturers to take further responsibility.

0 0 0 0
Previous : DEMOTE DAVIS: BPD Commissioner Must Not Be Kept By New Mayor Or Go To Homeland Security
Next : Quote of the Day