DEMOTE DAVIS: BPD Commissioner Must Not Be Kept By New Mayor Or Go To Homeland Security 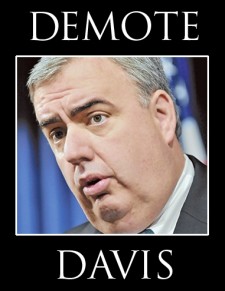 WE SAY DEMOTE DAVIS AND HERE’S WHY.

As the coronation of a new mayor is imminent there has been some discussion whether or not current candidates for Mayor would keep Ed Davis on as the Commissioner of the Boston Police Department. Davis has been both a heroic and a controversial figure. After the Boston Marathon Bombing he was nationally hailed as a hero and enjoyed and is still riding the wave of a new found celebrity status. It is my belief that it is due to the national attention on the Marathon Bombing that Ed Davis was even considered for a high level position with the Department of Homeland Security. Citizens of Boston depending on who you talk to have varying opinions on Ed Davis. I have been very critical of the current Boston Police Commissioner even at the very first announcement of his appointment due to his track record dealing with diversity coming out of Lowell.

Under his watch as most big city Police Commissioners we have had several scandals. There have been cases of police brutality, several police shootings of civilians, many crimes have gone unsolved and many in the community have said that Davis has turned a deaf ear on their concerns and proposals on how to best deal with crime & violence and better facilitate community policing. On top of all that Black and Latino officers have issued a public vote of no confidence because of major dissatisfaction with his performance in part because Black & Latino officers are more likely to be fired and demoted while at the same time they are seldom promoted. There have been several lawsuits filed by various parties for BPD misconduct dealing with everything from excessive force to discrimination complaints. Ed Davis has not shown the type of leadership in his position that would justify a new Mayor wanting to keep him, Several community groups and activists have stated that they will NOT be voting for any candidate who has said they will keep Davis.

The Candidates for Mayor of Boston who have pledged to keep BPD Commissioner Ed Davis are:

Here’s a link to the Globe Article:
“Minority Officers vow to oppose any mayoral hopeful who will keep Boston Police Commissioner Edward Davis”

• While working in Lowell, MA, Ed Davis sent a man to prison for 15 years based on a “suggestive identification.” The DNA later proved this man’s innocence and he was thereby exonerated. Today Davis is the Police Commissioner of the BPD.

• Daniel Linskey, serving as a detective, participated in the raid in which Rev. Accelyne Williams died (April 5, 1994). Paul Evans, The Commissioner of the BPD at that time, said the city made a “grave and tragic error.” Today Linskey is the Chief of the Boston Police Department.

• In July 2013, 24 year-old Amy Lord was murdered by Edwin Alemany. Davis strips Det. Jerome Hall-Brewster of his Detective badge and tells him in a private meeting, “Amy Lord is dead because of you.” Davis further crucified Jerome to the press and the South Boston community. Jerome never obtained the chance of due process. No one other than Jerome has yet to be held accountable.

• In 2009 Davis created a “Diversity Council” to meet on a monthly basis to generate ways to diversify the BPD after Oiste, NAACP, MAMLEO, Minister Don Muhammad, and others demanded some accountability regarding inclusion and equal treatment of officers of color. The council has not met in over 8 months and is now “defunct.” They never had a clear mission with objectives, or a measuring tool for growth and success.

• Since the 2008 promotional exam, officers on the BPD had not had an opportunity to take an exam. Davis has blamed it on the Lopez case, presently in the hands of Judge O’Toole. Individuals who’ve taken this exam contend that the results have had a disparate impact. Though the judge never said the Department could not give an exam, Davis had promotions waiting in limbo. Currently, the Dept. continues to promote from this exam (2008). Davis has said publicly that he cannot promote minorities if they do not obtain the necessary score, though studies have proven, historically, African- Americans and Hispanics test poorly on these kinds of exams. Earlier this year, April 2013, 12 sergeants were promoted. All of them were White males.

• On Friday, August 2nd, 2013 at 12 pm, Davis promoted 4 white males and 1 white female. Although there were 9 officers of color holding the same score, they weren’t even considered for the position. MAMLEO, along with several leaders and other organizations, questioned Davis’s intentions. At 4:10 pm that same day, Davis responded to a MAMLEO email stating he would add two black male officers to the list, and they were to report to the police academy on Monday, August 5th for supervisory training. Is this what he considers “Commitment to diversity?”

• As of August 5th, 2013 there are several candidates of color on the current promotional list for the positions of Captain, Lieutenant and Sergeant. As of this week we’ve learned, through the Boston Police Superior Federations Union, that Davis is attempting to fast track an exam. That is, gain quick approval on an exam that is already compromised and hasn’t even been drafted yet. This exam will be privy to selected Captains, virtually all white males with the exceptions of 1 Hispanic and 1 Asian male, who will be allowed to go through the questions.

The Department has had a history of compromising exams, like the Detective’s exam in 2007, when Davis stated in a memo, “It has come to my attention that the integrity of the exam was compromised.” Several other exams have been compromised in the past. Because of this factor alone, expediting an exam now would be a misstep on the BPD.

• Out of the last 14 Sergeants appointed to Detective Supervisors, only 3 have been officers of color (Witherspoon, Powell, and Lozano).

Today, Davis wants to be Director of Homeland Security. If this is how he conducts himself in the City of Boston, what do you think he will do across the nation?

Objectives:
(LIVE VIDEO OF THE VOTE OF NO CONFIDENCE)

BRING THE ABOVE ISSUES TO THE FOREFRONT

ASSURE EVERY CITIZEN & RESIDENT IN EVERY NEIGHBORHOOD RECEIVE THE SAME EQUALITY

WE HEREBY DECLARE A NO VOTE OF CONFIDENCE IN COMMISSIONER EDWARD DAVIS!

WE SAY DEMOTE DAVIS.
DON’T TAKE OUR WORD FOR IT.
HERE IS A SLEW OF ARTICLES ABOUT DAVIS:

Boston Police Commissioner Edward Davis: Forget Due Process, Migrants Are Criminals When I Say So

Davis defends his record on diversity

Never Let The Truth Get In The Way Of A Good Story: David Williams And BPD Commissioner Ed Davis

BRIC-ED IN: WHY THE BPD DIDN’T THINK THAT TAMERLAN TSARNAEV WAS A KILLER

0 0 0 0
Previous : FEMALE MODEL
Next : No Reply to Community Meeting Demand on Violence from Menino and Davis