The James “Whitey” Bulger movie starring Johnnie Depp has swept into town and everyone is abuzz with the filming of “Black Mass” which recalls the good ole days of Boston where the stench of freshly killed bodies was just as powerful as the racism in the air.  In keeping with Hollywood’s tradition of the anti-hero, where the audience is compelled to feel sympathy/empathy for a character that in reality is despicable, the same is done for time periods of history.  Take for instance the nostalgic view of the 50’s in America or even deeper take a look at the way slavery is depicted in many movies, sure there are tragedies but overall them slaves was having a good ole time.

Now here we are in 2014 and Hollywood has developed a new found love affair with all things South Boston.  The rising star power of Ben Affleck, Matt Damon and Mark Wahlberg has made these gritty Boston stories very compelling to the mainstream with scrappy, down on their luck characters just trying to make a way in this crazy mixed up world.  In all of these Hollywood dramatizations, the one factor that has either been left out entirely or minimized is the undercurrent of racism in Boston not only at that time, but which continues presently to a less vocal degree.

In the movie “Black Mass” it recounts scenes outside of South Boston High School where local white residents were protesting the busing of Black children into “their” school and “their” neighborhood.  The Universal Hub showed this picture of the Hollywood set team’s re-enactment of the scene: 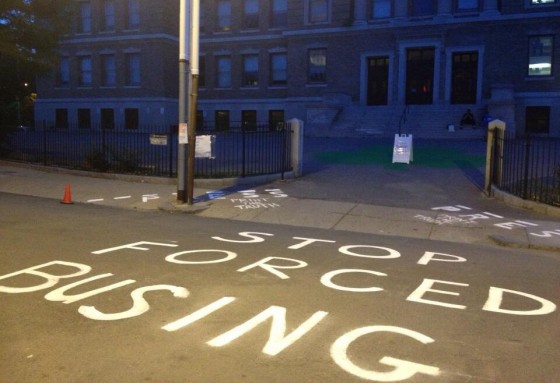 This is where Hollywood takes a trip down memory lane and makes a detour down the road of selective memory. The crowds at that time were not just there on an educational or transportation issue.  At the core of Boston’s anti-busing movement was a vicious foaming at the mouth racism.  The chants of the crowd, the signs, the graffiti did not just promote messages of stop busing, many of them read “Kill Niggers” “White Power” “Niggers Go Home” and other sentiments that would now be called “Hate Speech.” 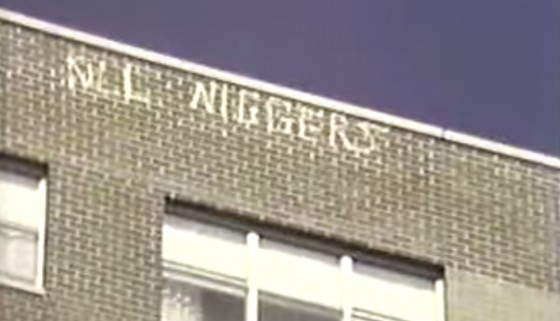 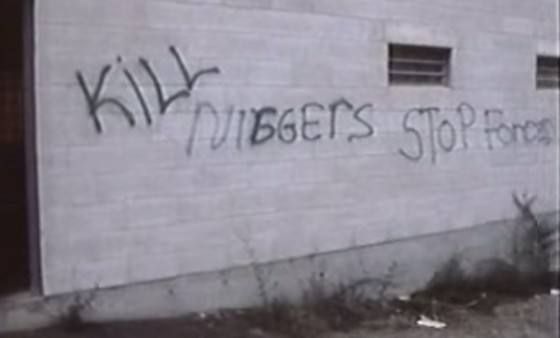 The crowds of adults and teenagers actually attacked children while yelling racial epithets, threw bricks at buses and even met with the KKK.  Clearly this was not just some righteous anger at an injustice this is Down South Boss-town Massa-ssippi. 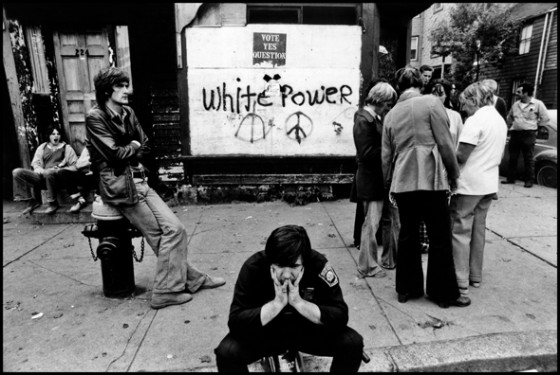 It is this embarrassing, yet enduring, part of Boston history that many would like to forget or gloss over, covered by yells of “One Boston” or “Boston Strong” and further glamorized and romanticized by Hollywood heart throb Johnny Depp playing the endearing “Whitey” who just happened to be a serial killing racist psychopath.  Just as “Whitey” will be humanized, so will the entire community and climate be taken down a notch in order to avoid depicting the feverish rabid racism that is much closer to the truth.  I mean, why ruin a good story with the truth?