Althea Garrison is at it again and by at it I mean running for office, as in whichever office is open.
This time she seeks the 5th Suffolk seat currently occupied by Rep. Carlos Henriquez.

Althea has run for City Council, State Representative and I have seen her run for the bus. The only thing she hasn’t run for is the Boston Marathon.

This is what is wrong with the democratic campaign process. Everybody has a right to run… even crazy people.

Garrison took out an ad in the Dorchester Reporter calling Rep. Carlos Henriquez “A do nothing incumbent” “Unqualified” “With little experience” and “No higher education learning experience”
WOW.
One thing is for sure, she has balls.

It begs the question though, is this ad appropriate? Is this what would called a “Negative Ad”?
The biggest question however is would Dorchester Reporter Editor Bill Forry have run this ad if he had the misfortune of Althea Garrison living in his district and running against his wife Rep. Linda Dorcena-Forry? Methinks not.

I know its a rough economy and no one wants to turn down an ad, (boy do I know), but I think Althea should have been advised by the paper to change her ad if it was to run. It makes the Dorchester Reporter look bad and it makes Althea Garrison look bad, which based on past performances doesn’t seem to be high on her list of concerns.

The best part of this is her claim that Henriquez has “No higher education learning experience” and then her misspelling of Dorchester as Dorcester. Priceless.

If you need more reasons why Althea isn’t fit to hold any office…
see our past article on her and other perennial candidate Roy Owens…
“You Must be Crazy: The Wrong Leadership for District 7” 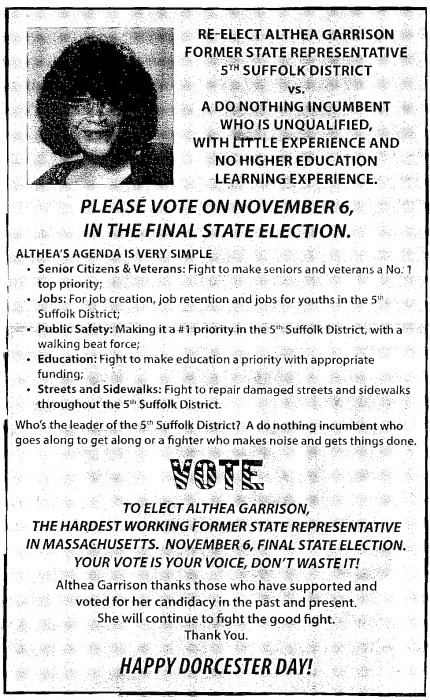