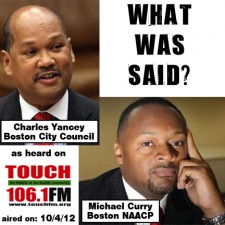 The Blackstonian is introducing a new segment “What Was Said” where we will whenever possible, provide the actual audio clips of hot topics and discussions that the community is buzzing about.

This will be an effort to reduce the game of “telephone” we all play when we try to explain to family, friends and co-workers about a discussion we heard on the radio, tv or even the bus. You know how the game goes… the further the story goes the more distorted it gets from the original.

In this first What Was Said
We will revisit a conversation that happened on Thursday, October 4th, 2012 on TOUCH 106.1 FM which was focused around the redistricting process in the City of Boston.

The conversation between Boston City Councillor Charles Yancey and Boston NAACP President Michael Curry became heated and intense, resulting in many people talking about What Was Said.

Here is the audio. Listen for yourself.

0 0 0 0
Previous : Roxbury Businessman says farewell, leaves to 100% People of Color owned
Next : Get Out The Vote Rally