Building diversity at the BPD from Boston Globe 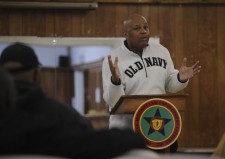 It was 1982 and racial tensions caused by busing in the city were still so high that police regularly were called to South Boston High School to provide security. Leading those officers was Superintendent Martin Mulkern, a heavy-set, clean-shaven officer who loved chatting with the students he met in the high school’s halls nearly every day.

Affable and curious, he took an interest in Larry Ellison, a senior and the first black class president in South Boston High’s history. You should become a police officer, Ellison recalls Mulkern once told him. “You seem to be able to work with people.” It was the first time anyone had mentioned the Boston Police Department to him, says Ellison, who was inspired by Mulkern’s style and kindness. “You could tell he just really cared about people,” Ellison says. “He was a good role model.”