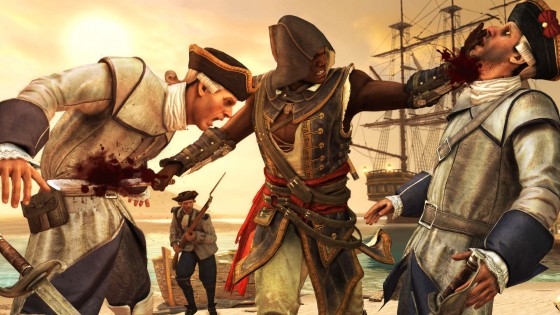 As you liberate people a certain percentage of them join the maroon resistance and join the fight and many become your ship’s crew. The ship (a former slave ship which you re-appropriated) has been refitted with a lion’s head mast head with broken chains in the mouth, the sails on the ship are emblazoned with a broken chain on them, and the ships steering wheel is made of melted down broken slave shackles.

In one mission while liberating a slave ship, the slavers begin to shoot the ship to sink it and you go on board freeing those below deck from chains.  As the ship sinks and you can’t save everyone it becomes an escape from the sinking ship with bodies floating in the water around you.  In another mission on the plantation where you have to kill the Governor who is a brutal white master, you come upon a scene where he is torturing a man with a brand, killing him was exceptionally gratifying. I know, I know its only a game but this was seriously emotional. I felt rage at parts, extreme sadness in others and joy at killing masters, traders and trappers.

Obviously, this is just a watered down video game depiction of what was Slavery. If you are looking to video games for 100% historical accuracy then you are certainly going to be ever disappointed.  This game, as far as video games go, was one of the few that has even attempted to broach this but one of many uncomfortable subjects. This game also does achieve some history in this effort. This may be the first video game created with a strong black character who routinely kills white people and is based loosely on historical facts.  If you saw or played this video game you cant help but have an emotional connection on some level if you are black and conscious.