Roy Owens Is At It Again (Very Bad)

Roy Owens is running for election again. This time he is running for Senate, specifically the seat currently held by Sonia Chang-Diaz. Owens is known for making some oddball statements and producing some entertaining literature. Once again he does not disappoint. Recycling his campaign propaganda from campaigns past, he recently released his latest piece taking aim at Chang-Diaz.  This same literature in previous campaigns has targeted former Rep. Carlos Henriquez and current City Councillor Tito Jackson.  It almost seems as if he pulls up the campaign template in Microsoft Word and replaces the name to fit whoever he is running against. Apparently while the find and replace command seems to be working fine in his Microsoft Word, the spell check is broken.

The campaign literature is full of religious rhetoric that even most Christians would find over the top.  Full of misspellings and grammatical errors you really have to read it to believe it.  In a democratic society everybody has a right to run. However, in this day and age Owens consistent candidacy is a set back for Boston Black Politics and often becomes a distraction from real issues.  Owens has become a laughing stock which diminishes the seriousness of whatever election cycle he is in and takes away from serious candidates.  His literature is sponsored by his own group “Save The Chilren Ministries.”  If we truly are to save the “chilren” Roxbury needs serious minded candidates to represent our community. In the meantime another Roy Owens campaign is bad. Very Bad.

Being black in England mean being shot dead and your home burned and in Libya shot dead, hung, throat cut, women are raped by American special forces and where mass murders is committed every day by  American booms dropped through out Africa in the name of  humanitarian aide, help Roy lift our voices, for our nation, our people and the glory of our God. http://www.royowensboston.mysite.com/index.html

Don’t believe us, look for yourself.
(click for larger image) 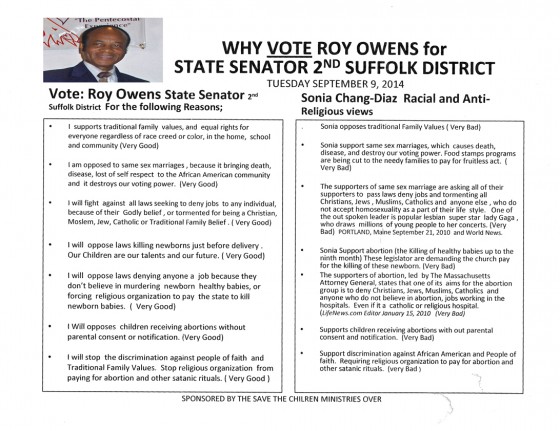 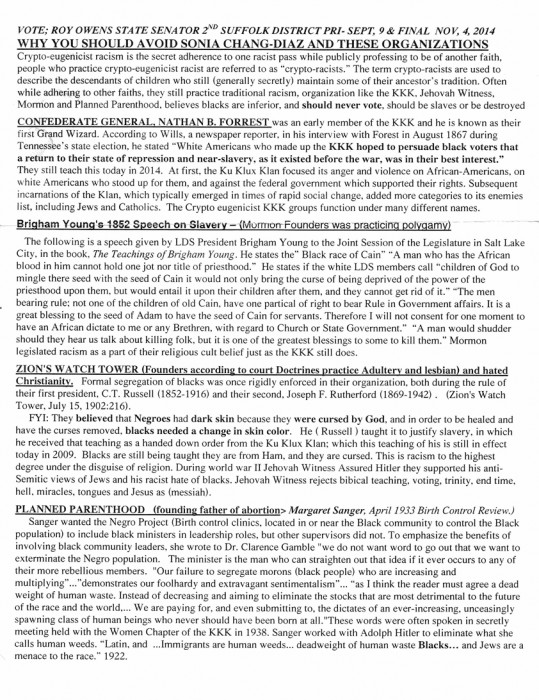 0 0 0 0
Previous : Quote of the Day
Next : Massachusetts Ranks 9th In US For Homelessness