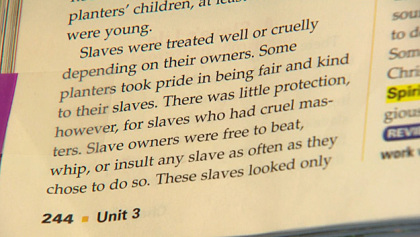 BROOKLINE (CBS) — Some parents of fifth-graders at Brookline Public Schools are outraged over a page in their children’s US social studies textbook that suggests some slave owners living during the 17th-century America were compassionate toward their slaves.
The portion of the book in question is only two pages, but parents say it’s two pages too many.
book2 Brookline Parents Outraged By Controversial History Textbook
The passage in question states, “slaves were treated well or cruelly depending on their owners.”
It goes on:
“Some planters took pride in being fair and kind to their slaves,” the text, published by Harcourt, states.

0 0 0 0
Previous : Quote of the day
Next : Meet the 20-Year-Old Who Built a YouTube Product Review Empire