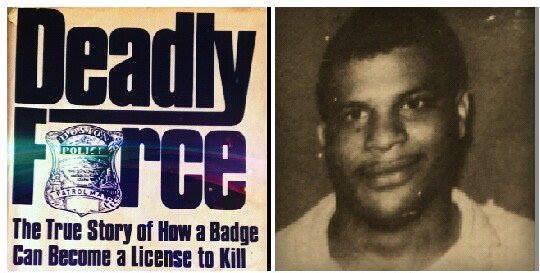 Fact-based story about a 1975 cover-up of a shooting by two white members of the Boston Tactical Unit. While on stakeout on a suspected getaway car used in a armed robbery, the two gunned down a black man who entered the car. The two claimed the man had a gun and they shot in self-defense. Police investigation decided it was a rightful shooting. The man’s widow knew her husband would not be carrying a weapon and became determined to prove her husband’s innocence. She hired a former cop who had become a lawyer to prove her case. Working with his four sons, the lawyer team takes on the police force in what eventually proved to be a landmark legal decision.

FROM THE NEW YORK TIMES:

CBS DRAMATIZES KILLING OF A BLACK BY THE POLICE

TONIGHT at 9 o’clock on CBS, ”A Case of Deadly Force” goes to Boston for a dramatization of one of the more explosive incidents ever to hit that city. In 1975, a 25-year-old black man named James Bowden was killed by two white officers of the city’s Tactical Patrol Force, a plainclothes police unit. The officers said Mr. Bowden had been a robbery suspect and had threatened them with a gun. Three department investigations backed their stories. But the widowed Mrs. Bowden, insisting her husband was not a criminal, would not accept the story. After scouring Boston for a lawyer willing to confront the Police Department, she found Lawrence O’Donnell Sr. The case would not get to court until 1980 and would not be fully resolved until 1984.

The film, produced for Telecom Entertainment by Bruce Pustin, studiously avoids sensationalizing. The story itself is strong enough. There is no avoiding the presence of ugly racism, but even that element is complicated by the fact that Mr. O’Donnell is decidedly as Irish-American as the accused officers. Looking at her new lawyer suspiciously, the film’s Mrs. Bowden comments that ”my husband’s killers were Irish.” Mr. O’Donnell merely responds, with a smile, ”Now you got one on your side.”

Actually, she has several. The entire O’Donnell family is on call to help dad. His sons Michael and Kevin are partners. Three other children are available for emergency chores (Lawrence Jr. would write a 1983 book about the case: ”Deadly Force: The True Story of How a Badge Can Become a License to Kill”). And his wife is the firm’s comptroller. With Richard Crenna playing Lawrence O’Donnell, Dennis Nemec’s script offers a portrait of an Irish Catholic home familiar from stories about the Kennedys. Tough, competitive, patriarchal, dad is in complete control. The family bonds are strong, and lively discussions around the dinner table are actively encouraged.

The key to Mr. O’Donnell’s taking the case is the fact that he himself is a former policeman, fully aware of the tricks and evasions that might be used in a ”sensitive” case. After learning that Mr. Bowden held a steady job as a hospital janitor since he was 17, the lawyer finds it difficult to believe that he would suddenly turn to armed robbery. Beginning his own investigation and running into a wall of noncooperation from the police, he quickly finds gaping holes in the official version of the story. Among other things, the robbery suspect being sought was tall and thin. Mr. Bowden was 5 feet 4 inches tall and weighed 180 pounds.

Convinced of a cover-up, Mr. O’Donnell explains that it is ”just business as usual – cops looking out for other cops.” But, he adds, ”they never expected anyone to come looking.” The film carefully limits the blame to the Tactical Patrol Force, which, it is implied, became so cocky and independent that it was operating without controls. When a couple of the force’s members later rough up Lawrence Jr., an infuriated Mr. O’Donnell confronts them with the charge that ”you’re nothing more than killers.” But he is shown several times being friendly with ordinary officers on the beat, many of whom seem uneasy themselves about tactical force behavior.

”A Case of Deadly Force” tells a difficult story well. There are the inevitable docudrama distortions, from too much of a sentimental emphasis on Mr. O’Donnell’s own mother being widowed when he was young, to having the O’Donnell children portrayed by actors considerably younger and more photogenic than the originals. The film, directed by Michael Miller, provides insight into both an important case – representing the first time in the United States that civil damages were awarded for a victim of a police killing without there being a prior criminal conviction in the case – and the fragile social contracts binding us all. In March 1984, the city of Boston, after years of delays, awarded Mrs. Bowden more than $800,000. Once again, Mr. Crenna, who can add something special to films as different as ”The Flamingo Kid” and ”Rambo,” demonstrates how skillful acting can make a fine performance look deceptively easy.