The large metropolitan areas with the highest levels of income inequality in 2014 included some usual suspects, but also a couple surprises (Table 1). The Bridgeport area—equivalent to the New York suburb of Fairfield County, Conn.—led the list, largely due to the very high incomes registered by its top earners (at least $560,000 for the top 5 percent of households).2 Two nearby metro areas—Greater New York and New Haven—also landed in the top 10, as did Northeast neighbor Boston. On the West Coast, both the San Francisco and Los Angeles metro areas also exhibited high levels of income inequality. So did the Southern metro areas of New Orleans, Miami, and Houston, the former two largely due to the low incomes earned by their poorer households (below $20,000 in both cases). 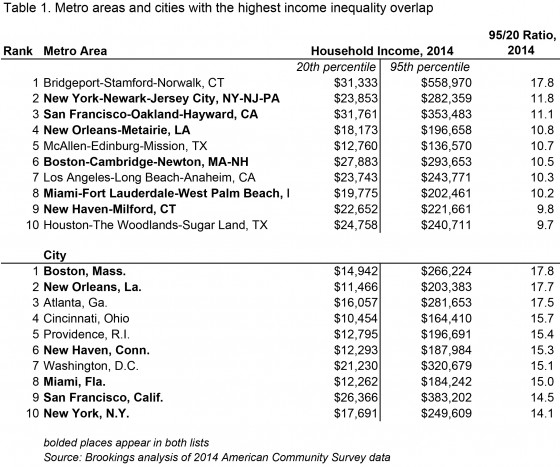