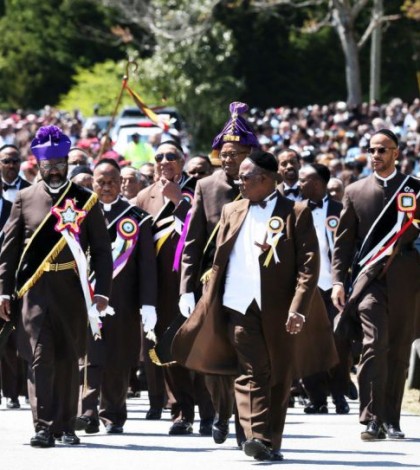 A spring breeze on Wednesday carried the sounds of an a cappella choir – 200 voices strong – from a modest brick sanctuary and large white tent.

Crowdy, 46, died April 10. He led the Church of God and Saints of Christ, a predominantly African American religious organization that follows the teachings of Judaism and has branches as far as Jamaica and Africa.

Crowdy’s great-grandfather founded the church nearly 120 years ago, according to the church’s website.

He died peacefully in his sleep, said B. DaVida Plummer, media coordinator for the church. He attended Saturday Sabbath that same weekend, she said, “full of joy.”

Media were not permitted to attend the memorial service held in North Suffolk, inside the organization’s original 1919 tabernacle on Judah Drive and a large tent for the overflow crowd. But the sounds traveled far beyond the walls.

“Oh yes, there will be singing,” said Jonathan Locke, district choir director of the church. The music came from the heart with lyrics pulled from the Bible, Locke said, “thanking God for the gift of Rabbi Crowdy, who has meant so much, for so long, to so many.”