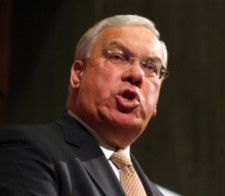 Boston Mayor Thomas Menino vetoed a controversial redistricting plan for the city, after it narrowly passed Boston City Council by a vote of 7 to 6. The plan proposed by Redistricting Chair, City Councillor Bill Linehan, was criticized by several Community groups and Black/Latino activists for not fairly handling citizens of color who now make up the majority of the city. The groups had planned to sue if this plan would have been approved.