The Environment & Human Rights committee public hearing has been rescheduled for Tuesday, December 18th at 3:00 PM to be held in the Iannella Chambers on the fifth floor of the Boston City Hall. You will be asked to testify on Docket #1341. 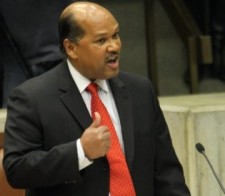 Boston City Hall (December 14, 2012) – The Boston City Council’s Committee on Environment & Human Rights will hold a public hearing to investigate the personnel practices and contracting policies of the City of Boston on Tuesday, December 18, 2012 at 3:00 PM in the Iannella Chambers on the fifth floor of Boston City Hall.

Councillor Yancey, chair of the Committee on Environment & Human Rights, said the racial make-up of many city departments fails to reflect the true diversity of Boston’s rich and multi-ethnic population. Such disparities in Boston reveal that Asians, Latinos, and African Americans may have less access to health care, credit and capital, and higher level employment in the City of Boston.

Friday’s hearing will also provide the Menino Administration with opportunity to discuss Boston’s contracting policies and whether or not disparities exist when it comes to the bidding and attaining process of contracts in the City of Boston.

“Disparities in hiring, terminations, promotions and contracting may contribute to the higher unemployment rates and lack of professional advancement for many residents of the City of Boston,” Yancey said.