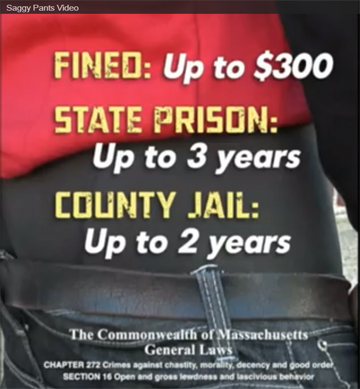 To be enforced in MASSACHUSETTS?
Arrest, Fines and Jail for Sagging Pants?!?

Blackstonian Editor’s Note:
I was shown this video PSA on Facebook and initially thought it was a joke. After I realized it was indeed serious, I became outraged. I was further shocked that this was coming from Mental Health Professionals who are surely aware of the rates of mass incarceration for Black & Latino boys and surely must be familiar with the School to Prison Pipeline and all the data that clearly indicates WE DO NOT NEED ANY ADDITIONAL TOOLS FOR LAW ENFORCEMENT TO USE TO FURTHER RACIALLY PROFILE, HARASS, SEARCH, ARREST AND INCARCERATE BLACK & LATINO BOYS (and now even some girls too).

The producers of this PSA are apparently attempting to force fit a few MA General Laws in this campaign.
MA General Laws
Chapter 272: Crimes against chastity, morality, decency and good order
Section 16: Open and gross lewdness and lascivious behavior
http://www.malegislature.gov/Laws/GeneralLaws/PartIV/TitleI/Chapter272/Section16