Blackstonian Editor’s Note: Currently, BPD Commissioner Davis is being considered for a top-level position within the Department of Homeland Security. It is incumbent upon us to research and study cases like these in order to determine for ourselves if the Commissioner has done a good job for the City of Boston. BPD Commissioner Davis’ commitment to diversity came into question upon his recent round of promotions in which he awarded 5 Officers the position of Sergeant and not one was a person of color (4 White males, 1 White female).

UPDATE: As of 4:09pm Commissioner Davis revisited this issue and promoted William Baxter and Robert Ward, both black males. 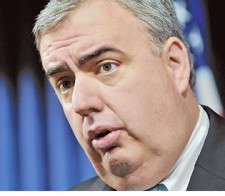 Commissioner Davis has decided to promote the following officers to the rank of sergeant:

None of the above officers are people of color. The commissioner & chief have talked a good game regarding diversity but as you can see they need to be judged on results. The last promotional class was virtually all white male officers!

We have the following officers of color in the same grade (score) that weren’t even considered! Now is the time to help change this. Tomorrow will be too late.