The Saga of Dirty Dan

“Dirty Dan was a mean old man,
does that dirt however he can,
lets tell you how it all began,
and this is the saga of Dirty Dan…” 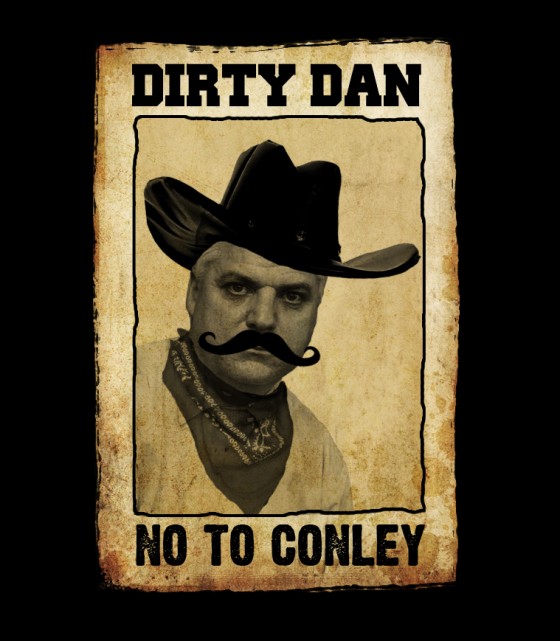 Dan Conley has issues. Due to his downright disrespect of our fine community he has been labeled as a desperado and dubbed “Dirty Dan” accused of playing dirty pool and dirty politics. If you see this fugitive from common sense remember he is NOT WANTED. DO NOT APPROACH HIM OR INTERACT WITH HIM IN ANY MANNER. Dirty Dan is a dangerous man and employs cunning and guile in his schemes to mislead innocent citizens.  If Dirty Dan should happen to be seen in your neighborhood, lock your doors, hide your husbands, Dirty Dan is a mean old man.

(Ok we have to admit it is difficult to keep up the wild west theme when we’re doing this on the internet and I’m providing actual moo-ving pictures and links. Please excuse us if the information we present here is not sufficient, we are after all knuckle heads.)

Dan Conley Didn’t Have a Great Monday
The mayoral candidate is getting bad reviews for his confrontation with voters Monday night.
By Eric Randall | Boston Daily | August 8, 2013
http://www.bostonmagazine.com/news/blog/2013/08/08/dan-conley-didnt-have-a-great-monday/

Conley giving back staffers’ donations
Tuesday, July 30, 2013 By: Richard Weir
http://bostonherald.com/news_opinion/local_politics/2013/07/conley_giving_back_staffers_donations
“Suffolk District Attorney Daniel F. Conley’s mayoral campaign yesterday, responding to a Herald inquiry, said it would return donations from three prosecutors who defied his edict not to contribute to his run for mayor, but the DA indicated he will keep nearly $2,500 from the spouses and relatives of 10 other staffers.”

“Joe Slavet, a longtime City Hall observer and former head of the Boston Municipal Research Bureau, said letting household members of staffers donate violates the spirit of Conley’s ban.”
“It destroys his credibility because people aren’t stupid,” Slavet said. “He said he didn’t want his employees to contribute, but he left the door wide open for members of their families to contribute. The worst thing you can do is think the voter is stupid.” Suffolk District Attorney Daniel F. Conley is an experienced prosecutor, a former city councilor, and a man who occasionally seems to have trouble keeping his ego under control.

“Yesterday, veteran BPD investigator Jack Parlon, head of the detectives union, accused Conley of “politicizing homicide.”
“He is involved in a schoolyard beef with the commissioner and he is using detectives to fight his battle,” Parlon said. “His ego and his arrogance have put the public at risk. It’s a disgrace, and he should be ashamed of himself. He needs to resign.”

The Rev. Jeff Brown, said many homicides in the city, including ones on trains and buses, are connected and homicide investigators with gang knowledge are critical to solving them.

“When you have a homicide in Boston, you want to have a detective who is on the streets, who knows the players. You don’t need to have someone come in from Leominister or Route 2 and try to solve a Boston case. It’s ridiculous,” Brown said. “If I could get a message to Dan (Conley), I would say that we can’t afford this kind of public fight right now.”

“The state police commander said he was not “involved nor consulted” by Suffolk District Attorney Dan Conley about his controversial move to put troopers in charge of homicide cases on the MBTA, a claim that comes on the same day that a police union head called on the DA to resign.
Col. Mark Delaney, who is in charge of state troopers, said in a statement that he did not discuss Conley’s plan to replace BPD homicide detectives with state police in murder investigations on T property.
“The state police were not involved nor consulted in the recent decision by the Suffolk County District Attorney,” Delaney said. “I have the utmost respect for the abilities of (BPD) Commissioner (Edward) Davis and the men and women of the Boston Police Department.”

“Within the past few years Boston’s homicide rate drastically increased while the arrest and conviction rate severely dropped. The homicide rate is not as bad as in the late 1980s and early 90s but it is well on its way. One of the problems has been the competence of the Boston Police homicide division. Dubbed ‘the worst homicide squad in the country’, some of the malfeasance and misfeasance of the unit has been well documented. In addition, the unit responsible for forensics has historically been a dumping ground and the BPD is finding it difficult to bring it up to current standards. It has been obvious to many for years that the investigation and prosecution of serious crimes in Boston has been abysmal.

Suffolk County District Attorney Dan Conley has shown zero leadership during this crisis. He has turned a blind eye to incompetence, neglect, unprofessional and possibly criminal behavior by members of the Boston Police Department.

Why? Most likely because that is Conley’s political base more or less. The D.A. does not have a base like other pols. All he has is about 200 jobs to hand out. More than 100 go to lawyers. No one cares about the D.A. except those 200 people, their families, and the pols who want jobs from the D.A. Oh yeah, and cops. Cops care. So Conley has spent the past four years making friends with many cops. Which means not upsetting the apple cart. Which means no political courage or leadership.”

”Cornell Mills is a nice young kid who certainly got himself in some squabbles, but was never convicted of anything,” Conley said. ”He’s well liked around here; he’s gotten terrific reviews from supervisors. We gave him a chance, and he deserved that chance.”

The civilian investigator position is an entry-level position, with a $25,000 salary, and is often a steppingstone to other law enforcement jobs, such as with the State Police or FBI. Conley spokesman David Procopio said there are typically dozens of applicants for the positions.

During criminal background checks his office conducts for all job applicants, Conley said, he automatically rejects people with convictions for violent crimes or felonies. Conley also said that during Mills’s background check, his office probed whether Mills had a pattern of socializing with gang members or other known criminals and determined he did not.

Conley declined to say whether any other investigators in his office have arrest records. But he said that officewide, including support staff, about five of 279 employees have ever been arrested.

A number of villains could be singled out in the April 3, 2003, arrest of UMass Boston Africana-studies professor Tony Van Der Meer. For instance, there was the Massachusetts National Guard recruiter who allegedly told both Van Der Meer and Tony Naro, a student handing out anti-war leaflets in commemoration of the Reverend Martin Luther King Jr.’s assassination, that they should both “be shot” like King. That, after all, is what led to the subsequent confrontation.

Or how about UMass Boston police officer William Lanergan? Summoned to the scene by the National Guard, Lanergan reportedly ordered Van Der Meer to “shut the fuck up” and then grabbed him, tearing his jacket and damaging his glasses. Police, naturally, charged Van Der Meer with assault.

The Muzzle, though, goes to Suffolk district attorney Dan Conley. Unlike the National Guardsman and Lanergan, Conley had an opportunity to review the case against Van Der Meer calmly, after the confrontation had already played itself out. Conley knew that numerous eyewitnesses had sworn that Van Der Meer hadn’t laid a hand on Lanergan or any other officer — that he was merely exercising his First Amendment right to speak out against the war and on behalf of Naro, who was one of his students.

Yet Conley waited until last December — some eight months later — to end the absurd case against Van Der Meer. And even then, he couldn’t admit that UMass police had been wrong. Van Der Meer was offered two months’ probation, after which time the charges that he had assaulted a police officer and resisted arrest would be dismissed.

Following Van Der Meer’s arrest, Conley’s spokesman, David Procopio, told the Boston Phoenix’s Kristen Lombardi that the charges “have nothing to do with free speech.” Rather, he said, they amounted to “an allegation of assault and battery on a police officer — and the First Amendment doesn’t protect that” (see “Climate of Fear,” News and Features, July 25, 2003). After the probation deal was reached, Procopio still refused to concede that the arrest had been wrongheaded, citing Van Der Meer’s “lack of any prior convictions,” rather than the obvious fact that he’d done nothing wrong, as the principal reason for not moving ahead with a trial (see “Follow-Up,” This Just In, December 19, 2003).

As Naro has observed, it seems clear that police, responding to a call about the confrontation, saw a white, uniformed National Guardsman and a black, dashiki-clad man yelling at each other and did what came naturally: they arrested the black man, got physical with him, and then claimed he had assaulted them. Conley, as prosecutors are wont to do, declined to question the veracity of the police account.

“Free speech,” Van Der Meer told Lombardi, “is not a criminal act.” Unfortunately, on one day in April 2003, it was.

We’ll stop here for now… perhaps at another date we can dig into his record while on City Council, he was just as Dirty there.
Help us stop this desperado. Look for #DirtyDan on Twitter
Stay tuned for the next episode where we find out:
Will DA Dan Conley prosecute Dirty Dan for shooting himself in the foot.
AND we’ll be talking about what not to read; If you need advice on life I do not suggest the Dan Conley self-help book.

0 0 0 0
Previous : Quote of the Day
Next : Gun Battle Leaves 2 Police Shot, 1 Suspect Dead; Manhunt for Other Suspect Shuts Down Dorchester