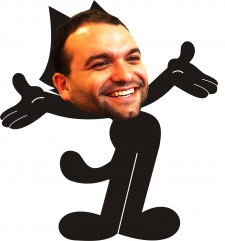 Boston City Councillor At-Large Felix Arroyo is currently running for Mayor of Boston.  In that pursuit he is asking the people of the City of Boston for support.  In order to decide whether or not the voters of Boston will support Felix Arroyo the Blackstonian wanted to provide the community with information that will help you determine Arroyo’s trustworthiness, character and loyalty.

Arroyo has long proclaimed that Chuck Turner was one of his “mentors” and “close friends” and many of us are aware that Felix Arroyo began his career in politics working in Councillor Turner’s City Hall Office.  However in Felix Arroyo’s campaign materials and bio there is no mention of Chuck Turner whatsoever. Its as if Chuck Turner never existed.

His bio when he first began his campaign stated that he started his political career at SEIU which many people know came AFTER his time at Councillor Turner’s office.  Currently, Arroyo has completely sanitized his bio from his campaign page so you are being asked for your vote without even a thorough biography of the candidate.

In order to provide information to the community we wanted to share the following 2 videos.

1. First, is a recent video from 7/22 during the Greatest Minds Mayoral Forum held in Grove Hall’s Flames Restaurant. The Blackstonian had the opportunity to question Arroyo on diversity in his staff and divesting City of Boston funds from Florida in response to Zimmerman not guilty verdict. Arroyo was also asked if he has had any contact with Turner during his incarceration and if he or anyone else apologized for voting Turner off the City Council now that a court of law has determined that they were all wrong except for Yancey who was the only one who did not take that vote and warned against it.

2. Secondly, is video from the Dec. 2010 Boston City Council Hearing on the ouster of Chuck Turner. Here we have specifically taken just the testimony of Felix Arroyo.  If you would like to see the entire hearing please click here.

0 0 0 0
Previous : Charlotte Golar Richie and Charles Yancey on Meet the Mayoral Candidates
Next : Quote of the Day