As the infamous Boondocks episode so precisely portrayed, the imagery of Martin Luther King, jr. has been used by all sorts of companies hawking a product from McDonald’s to Bank of America.  Many of the companies and other entities using MLK’s image and message for their own purposes would have most likely been targets of his organizing efforts.  If Martin Luther King, jr. were still alive we can be sure that he would have already expanded his poor people’s campaign to include the current fight for workers rights and fair wages and he would have been very vocal about foreclosures and subprime loans.

When asking “What Would Martin Luther King Do?” and considering the most recent events and protests across the country, it is certain that Martin Luther King, jr. would be on the front lines of the growing demands for police reform.  Martin Luther King, jr. himself had direct first hand knowledge of police corruption, excessive force and abuse of power.  The civil rights movement was often targeted by police, beaten by police, attacked by police dogs and far too often local law enforcement and groups like the KKK were one in the same.  When King was advised to stay out of cities, it was often the local police chief who took to the air waves denouncing King as a “trouble maker” and assuring good white citizens that any “negro rebellion” would be quickly quelled.  There was also local police cooperation when King was assassinated.

Our conclusion is that  In the pursuit of justice through police reform we have launched the site: www.MassPoliceReform.com and today we have released a letter asking the Department of Justice to investigate and help reform the Boston Police Department.

Feel free to use this image and the hashtag #WWMLKD 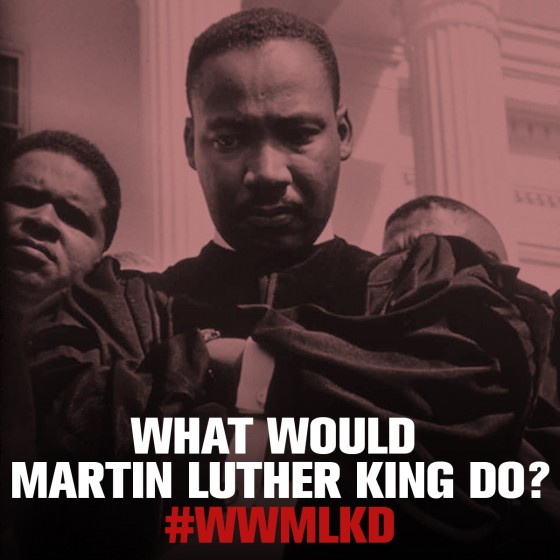 0 0 0 0
Previous : Quote of the Day
Next : Letter to DOJ: Investigate and help reform BPD