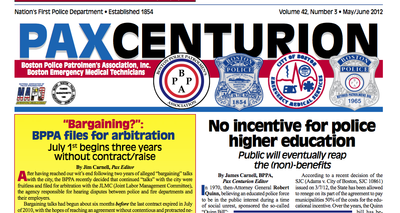 So the city is buzzing about the Boston Police Patrolmen’s Association publication “The Pax Centurion” and its Editor, Jim Carnell, who for years has spewed vile rhetoric in its pages.

I’m glad that Occupy Boston, advertisers and some media are now concerned.  However, I find it ironic and indicative of white privilege that there’s a hullabaloo now that some white people from Occupy Boston are offended.  In years past, Carnell and also Boston Police Patrolmen’s Association President Thomas “Tom” Nee have espoused views offensive to African-Americans, Africans, Latinos, Muslims, Homosexuals, Women, Immigrants… you get the picture.  MAMLEO (Massachusetts Association of Minority Law Enforcement Officials) expressed their outrage when a newly elected President Obama was depicted within the pages of the Pax Centurion as Obama Dawg, obviously a throwback to the racist caricatures of Jim Crow and Slavery and an echo of the racist right wing conservative party line in chorus with “birthers” and tea partiers.

Thanks to Universal Hub for some great updates…
Four more advertisers drop out of police-union newsletter
By Adam G, Universal Hub

Here in the Blackstonian, we actually created an award for just these type of situations, The Archie Bunker Award (The Archie Bunker award for foreward thought and outstanding achievement in “intellekchewalism”) of which James Carnell is a most esteemed and deserving recipient.

Anyone who has been following Boston politics, Boston Police or race relations, should already be well aware of the insidious threat posed by these select BPPA Union higher-uppers.  All of the entire Boston Police Department should hang its head in shame at the antics of these morons which do nothing to advance community relations and keep alive the horrible image of racist, heavy handed, bone headed, foul mouthed cops.  It is officers like Carnell and Nee which make kids hate cops and use descriptors like pigs.  When Officer Justin Barrett spouted “Banana Eating Jungle Monkey” during the highly publicized Skip Gates’ fiasco, he was disciplined by the BPD for publicly saying things unbecoming a police officer/public servant.  Is this not the same scenario? In fact even more drastic as Carnell and Nee have consistently been the vanguard of vitriol for years.

Let us not forget as well that some of these poisonous thoughts have even affected Nee’s own family, with his son Joseph “Joe” being caught up in a heavily publicized Columbine copy cat type plot at Marshfield High School fueled by heavy metal and a good dose of neo-nazi and white supremist propaganda.

This is a dangerous pattern also exhibited by Carnell who has several of his family members exposed to this archaic rhetoric and writing for the Pax Centurion as well. Most notably, Patrick “Pat” Carnell, who is a UMASS student and frequently contributes.

Check out the latest edition of the Pax Centurion

and if you really want to make yourself angry browse through the archives…
http://www.bppa.org/pax/