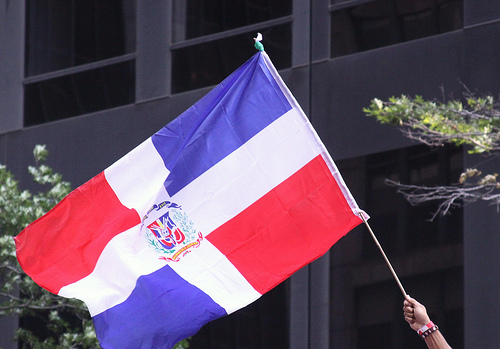 An article by Patrick Rosso for the Globe entitled “Residents in Roxbury raise concerns about relocation of Dominican Festival to Clifford Park”  covers a meeting between the  BPD, the Latino Liason to the mayor, and the residents and business owners of the neighborhood surrounding Clifford Park where the annual Dominican festival is set to take place due to construction at Franklin park, the festivals usual venue. The article opens summing up the meeting in these words:

“Residents in Roxbury are not happy with the relocation of the annual Dominican Festival.”

However, some Dominican residents are not happy for a different reason: “ridiculous, racist, and baseless comments” made at the meeting by Sheree Theall, owner of Victoria’s Diner and The Hen House and other people present at the meeting. In a response posted by a community member who would prefer to remain anonymous, a call is put out to attend the festival and to boycott Vicorias Diner:

“I’m concerned for the safety of my customers and my employees,” said Sheree Theall, the owner of Victoria’s Diner on Massachusetts Avenue. “There will be people who will be there just to start trouble.”

On August 13th, a meeting was held by the BPD and the Latino Liason to the mayor for the residents and business owners of the neighborhood surrounding Clifford Park. At this meeting, unlike what residents are quoted saying in the linked article, the concerns were not so much about the amount of people that will be attending the festival. Instead, the meeting was filled with with discriminatory and stereotypical comments. Residents and business owners, such as Sheree Theall, owner of Victoria’s Diner, do not want the Dominican festival to be held at Clifford Park NOT because there will be “too many people for the dense urban neighborhood to handle”, but because “THOSE PEOPLE”, as they constantly referred to Dominicans, will bring unnecessary violence to the area. They are worried that Dominicans will bring drugs, guns, knives, and other weapons and fill the neighborhood with mayhem.

After the police tried to calm the residents’ worries by explaining that there would be sufficient police and emergency personnel present, the residents and business owners went as far as to say that “if the event was so safe, why is there a need for so much personnel?” Great logic there.

Sheree Theall even demanded that the Dominican Festival committee pay for a cop to guard her restaurant against people who want to come in and use her bathroom, as if a a sign stating “NO PUBLIC RESTROOMS” is not enough. Residents even complained about how it is not fair that their tax dollars are being used to fund such an event, not realizing that this event is completely paid for by the Dominican Festival comittee. Residents even expressed concerns about Puerto Ricans being invited to the event.

Please show support by attending the Dominican festival and parade on Sunday, August 18th to show the residents and business owners in this neighborhood that Hispanics are not savages they think we are. The days where only whites were allowed to have parades and festivals in Boston, are long gone. Also, please BOYCOTT VICTORIA’S DINER for the ridiculous, racist, and baseless comments expressed by owner Sheree Theall.

In a comment posted in the comments section below Sheree Theall responds:

I am responding to the accusations being made against me & the business I run, Victoria’s Diner. We run a family business here at the intersection of three great Boston neighborhoods, Roxbury, Dorchester and South Boston. We consider our employees part of our family, and they come from all types of ethnic backgrounds, many from those same three communities. My family, through love and marriage is made up of many ethnicities, one of them being Dominican. I have nieces and nephews of Dominican descent. My concerns were never about the group’s ethnicity – but about the short notice given to us and about the logistics of having such a large crowd – any large crowd – of people in such a small area, i.e.; traffic, parking, public facilities. Whatever the event to be held across the street – any that would draw such large crowds – would give us the same concerns. Imagine yourself the operator of a diner on a Sunday and because the Parks Department hasn’t informed us of public bathroom facilities that will be available, the concern of maintaining order with a mostly female staff. I myself have been pushed past because of our policy of “no public bathrooms”. We continue to welcome and are grateful to all of our customers for choosing Victoria’s Diner. We are proud to be part of such a diverse neighborhood. We wouldn’t have chosen another Diner/Restaurant in another area – because we wanted to be involved with this community in particular. It is disturbing our concerns were taken out of context and are being used to slander us when we have said and done nothing to deserve this backlash. State Representative Carlos Henriquez, echoed the same concerns and we have spoken many times since. I would be happy to sit with Representative Henriquez and concerned parties that may have been offended by my request for safety assurances for my patrons and employees.

State Representative Carlos Henriquez, who was at Wednesday’s meeting, said he heard the remarks by those in attendance who spoke and could understand why some people took offense at some of the comments made at the meeting.  “There were comments  that rubbed me the wrong way” he said, but added  that his concerns about the comments were addressed in the meeting immediately by himself and several others and that it was clarified at the time that the speakers were concerned about any large group of people, not who those people were. While he acknowledged that comments made by many people in the meeting were not well received, he was impressed with some of the other business owners present, like the owner of Liquor Land (located next to the Hen House, across the street from 1010 Mass Ave.) who was primarily concerned with curbing underage drinking and public drinking and drunkenness.

Rep. Henriquez said his primary concerns about the relocation go back to the initial decision to move it from Franklin Park, which he feels is a better location and had other areas in the park where the festival could be held even with the construction. “In terms of infrastructure, public safety and crowd and traffic control, Franklin Park is an easier location” he said, noting Clifford Park’s lack of parking, proximity to homes and access to the highway. In a letter sent to  the office of Mayor Menino, City Councilor Tito Jackson, Inspectional Services, Public Works and the B2 Police Department, he outlines his concerns:

I write to you today regarding the annual Dominican Festival which this year has been permitted to be held at Clifford Park on Shirley Street in the district I represent. I have been in contact with your department, members of the Boston Police Department and most importantly my neighbors and constituents. Several concerns have been voiced and I want to share them with you in advance of the event so that all stake holders can work together to address and mitigate these concerns.

• Parking is a concern. This event will draw thousands of people from different parts of Boston and Massachusetts. To date a 200 car parking lot has been made available. I and other residents feel this will be inadequate and that steps should be taken to protect the integrity of the abutting neighbors (driveways) as well as businesses like Victoria’s Diner, Liquor Land and the South Bay Mall who will be impacted by traffic and parking.

• Currently, the event is permitted until 10pm on a Sunday night. This is a late end for an event that will effect residents on a work night whom may be impacted by the sounds from the park itself or the cars and foot traffic leaving the event. Residents have been vocal about an earlier end time. Suggestions for 9pm were made.

• Traffic enforcement is another issue due to the large volume of people this event will attract, residents, businesses and traffic flow will be impacted and I would like to know what steps will be taken to minimize the inconvenience to abutters.

• Public safety was another issue raised. I believe the Captain of B2 and his staff are well equipped to handle this event. However, I ask that specific detail be paid to the quality of life issues around the park that day. Issues that have been mentioned range from: public drinking and intoxication, public urination, litter and vandalism, destruction of public and private property, loitering and violence

• Securing 130 and 136 Shirley street. Currently these houses stand as abandoned, forclosed, unsecured structures. They are currently reported as houses used for illegal drug use and this problem could be further exacerbated by the event in close proximity.

It is a dangerous place daily but even more so near a family event with thousands of people that may encounter these addresses. I would like inspectional services to properly secure these locations prior to the festival.

• As I previously stated, Clifford Park sits close to several residential areas who will no doubt be impacted by the increase traffic in the community Sunday August 18 know, even though the organizers are providing clean up crews for the park that litter will take place across the neighborhood hopefully not ending up on private property or even public streets. I would like a commitment that public works will be on site the day before, the day of and the day after to provide affected streets (which may be as many as 15-20 depending on parking and traffic patterns) with a thorough cleaning. I am asking for men and women with gloves, brooms and shovels because these streets are narrow, dense and a street sweeper alone may not be sufficient

• Lastly, Clifford Park is a community assest and home to the Boston Bengals pop warner football team who practice and play their daily. With the heavy traffic this event will bring to the park, I would like to make sure that the field surface is repaired, reseeded, redrawn to its best shape for the community shortly afterwards.

I will close by stating that I believe that the city and residents should be holding cultural and enriching events in our public parks. I am not opposed to the Dominican Festival or other events. I am responsible for representing the concerns of the abbutters who again are not only my constituents but also neighbors and friends. I hope to receive a response to these concerns in short time so that I may have the time to communicate them to all concerned parties.

Thank you for your time, effort and service in our community.

While Rep. Henriequez has not yet received a response from any of the offices he sent the letter to, he “stands ready to hold them accountable.”

District 7 City Councilor Tito Jackson who represents the district which contains both the former and current location of the festival had no comment to offer but a member of his staff said ” the event has been moved because Franklin park is under construction, that is what everybody knows. We were at the meeting Wednesday. We have no comment at this time”

More Coverage of the Meeting on the Boston Globe