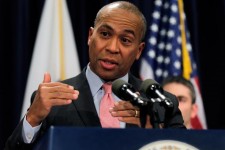 Editor’s note: A bad move by Gov. Deval Patrick and part of a trend of honoring and awarding officers who are linked to high profile cases.  This is a wink and a nod to officers to assure them that the union and police departments “have their back” in controversial cases. Awards like this are a slap in the face to victim’s families who are still seeking justice and breed mistrust in the general public.  Let’s remember that Officer Aaron Hess who killed DJ Henry was given an “Officer of the Year” award by his upstate NY department. See also Boston Police Awards 3 Officers involved in High-Profile Brutality cases infused with race.

It seems almost too ridiculous to be true. Or at least too insensitive. Especially during a time when the behavior of law enforcement is front-and-center nationwide, and with the grand jury still out on whether Ferguson, Missouri police officer Darren Wilson broke the law in fatally shooting 18-year-old Michael Brown.

Yet it is the case, unbelievably, that Massachusetts Governor Deval Patrick and the State Police pinned a medal yesterday on three troopers who shot and killed Denis Reynoso, a veteran of the Iraq War who was reportedly suffering from PTSD. The shooting happened last year at the victim’s apartment complex in Lynn.

According to the Lynn Item:

Three Lynn police officers received the state’s highest law-enforcement honor Wednesday in recognition of their efforts in 2013 to subdue a disturbed West Lynn man who was ultimately fatally shot by one of the officers after he grabbed another officer’s gun.

The Hanna Award is “the highest medal a Massachusetts law enforcement officer can receive,” according to the award website.