In 1986 Roxbury and surrounding neighborhoods attempted to secede from the city of Boston and form their own incorporated city; Mandela. This documentary mixes archival footage from the time with reflective interviews from activists and legislators that were involved in the movement (Gloria Fox, Mel King, Byron Rushing) to tell that story in the words of those that were there. 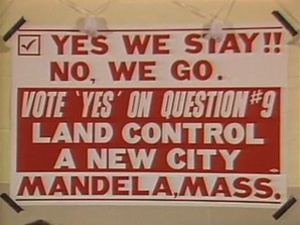