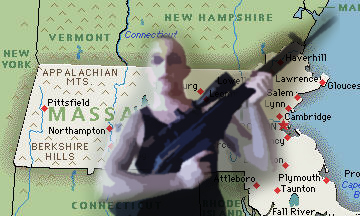 The Blackstonian has long warned about the rising presence of neo-nazi, skinhead and white supremacist groups in the New England area.  These groups are finding new homes and establishing significant bases in Vermont, New Hampshire, Maine and Massachusetts. Here in Boston most people would be amazed to know that there is a significant presence right here in the Boston and Cambridge area.

It has always interested me (not shocked) at how law enforcement does not focus on this group of people who have shown themselves to be dangerous and violent with crimes and assaults across the country on victims of all kinds; elderly, children, male, female, Black, Latino, Jewish, gay, disabled and more.  Law enforcement has focused instead on “Black Power” groups while these white supremacist groups are amassing huge arsenals and openly talking about overthrowing the government.

When we ask the question “Is Boston Racist?” all you have to do is read the comments sections from our two newspapers and remember these few examples of the history and relationship between Boston and white supremacist groups. Over the years multiple instances have come to light that indicate the undercurrent of white supremacist plots or crimes.

The KKK came to Boston in 1974 to stir the pot in the busing crisis with their rockstar David Duke and are rumored to have made two well known politicians “honorary” members.
More here: http://openvault.wgbh.org/catalog/tocn-mla000757-david-duke-speaks-in-boston

The KKK came again to Boston in 1982 to march downtown and a melee broke out on popular TV show “People Are Talking”
More here: http://www.thecrimson.com/article/1982/10/16/kkk-will-demonstrate-in-downtown-boston/

Boston Magazine article from 2006 “Hate Thy Neighbor”
Many people assume that liberal, progressive Massachusetts is immune to hate groups. The Bible Belt and the Confederate South, the dreary Pacific Northwest, the white-bred Midwest — that’s where those groups thrive and flourish, they say with a collective sigh. But make no mistake about it, experts say: They’re here, too. Massachusetts has active members of not just the National Alliance but also the World Church of the Creator and the Ku Klux Klan. In fact, according to the Southern Poverty Law Center, which tracks such groups, there are more hate groups in Massachusetts spreading their particular brand of virulence than in West Virginia.
More here: http://www.bostonmagazine.com/2006/05/hate-thy-neighbor/

There are more examples and in the future The Blackstonian will take an in-depth look at White Supremacist groups in the New England area. Stay Tuned.